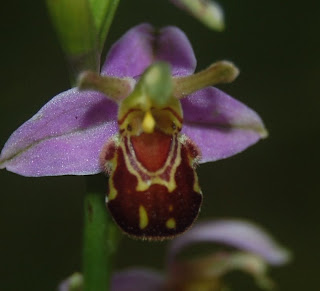 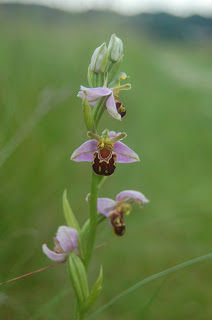 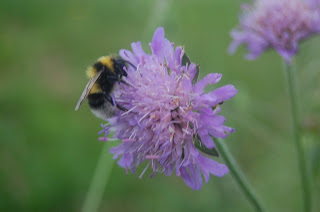 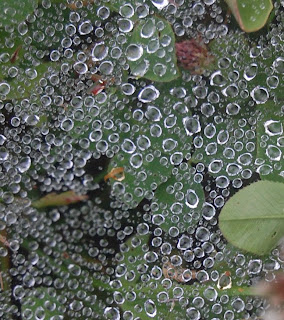 In the now expected grey light I had a wander to and over the golf course to the bench next to the 2nd green. The highlight of the walk was discovering a bee orchid (ophrys apifera) growing on the golf course. A neighbour had alerted me to their presence and I thought a walk to photo the specimen was in order. However, I discovered one en route as shown here. A fascinating flower that resembles a bee to the extent that male bees try to mate with the flower, thereby pollinating the plant.

Two types of hover fly were recorded, the previously mentioned eupeodes nitens, but more interestingly, I managed a photo of the 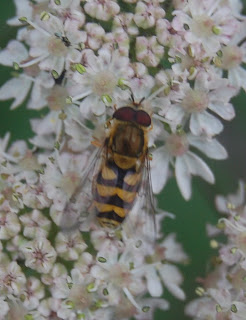 Also observed were good numbers of swifts (30+) with a few swallows mingled in. Common whitethroats, blackcaps, chiffchaffs and yellowhammers sang throughout the walk. Skylarks sang over the G.C. as a kestrel hunted the rough. Another kestrel, the regular, was observed over Brick Kiln Hill. Green woodpeckers were evident all along the River Ash whilst 1 common blue damselfly was witnessed, but not stationary enough to be photographed.

A super cobweb, holding small raindrops glowed in the grey light, had there been sun it mat have been extremely photogenic. New plants in the shape of 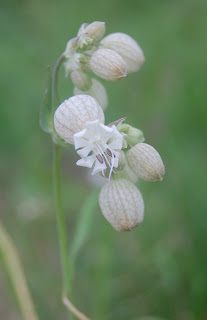 bladder campion (silene vulgaris subsp vulgaris) and field scabious (knautia arvensis) were both discovered in the ditch between the 6th and 7th hole on the G.C. The latter depicted with the feeding bumble bee.

The last 2 photos here show a

2 spot ladybird, found on hedge parsley and a soldier beetle of the species rhagonycha fulva. 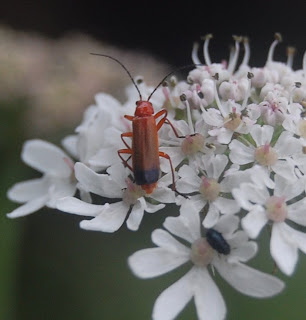