A quick morning trip to Amwell to make up for the postponement of my planned trip to Lakenheath Fen Reserve. Weather was so poor at 5.15a.m. I deceided against going as the red footed falcon, golden oriole and sav's warbler would not be showing well on a wet and windy day. Maybe next week?
Amwell remained as it has for a fair few weeks: little ringed plover, redshank, little egret, lone out of season wigeon, common terns etc. Plenty of whitethroat, sedge warbler and reed warbler singing, plus reed bunting.

Below are the moths taken already this year. A very low total for this time of year. Weather continues to be dreadful with only a couple of nights in the whole of 2013 where I have trapped more than 20 insects, never mind 20 species!
By this time last year I had trapped 71 species; here is this year's list. (red shows a new moth for me)

A total of 39 species indeed highlights the chronic weather conditions. 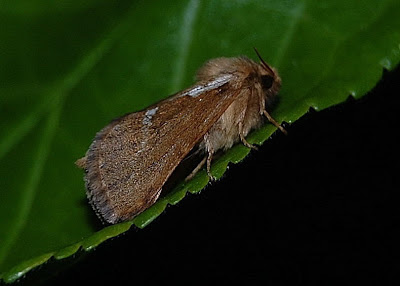 A common swift (above) was the only new moth of the year in an extremely soggy trap this morning. Plenty of ichemon wasps and yellow spotted craneflies, but the only other moths were a brimstone and another cabbage moth. Another disappointing night.

Posted by Jono Forgham at 08:05 No comments:

Following on from the pale tussock last night, I had hoped for a reasonable haul. However, as it often the case, after a day of rain, very little had made it to the trap.
A garden carpet and micro moth Epiblema cynosbatella were only noteworthy insects, both being new for the year.

A quick visit to the trap this evening gave views of a new moth for the year; a pale tussock. Weather conditions good at present, so hopefully a few more by tomorrow morning. At present: overcast and dry, if still a trifle colder than usual for 3 weeks away from mid summer!

Posted by Jono Forgham at 23:06 No comments:

First dragonfly of the Year


A 4 spotted chaser dragonfly flew through the garden yesterday (Monday 27th) and a neighbour appeared at the door with a cock chafer beetle.
Would be good if the dragonfly used our new pond for ovipositing (egg laying.) We have put in certain vegetation to encourage such from both damsel and dragonflies. Plenty of small insects already using the pond so there will be food for the larva of such larger insects. Just wait and see over the next few years.
Posted by Jono Forgham at 15:21 No comments:

A few new year listing birds and some new for the year moths. Weather wise, 2 hot days, but now back to rain.
A hobby was spotted locally on Saturday whilst a surprise turtle dove was seen as I was driving back from a local village. The turtle dove was flying parallel to the car for a few hundred yards. Very obvious flight pattern gave it away before plumage was noted.
As for moths, it isn't really getting any better. The drop in night time temperatures means very little on the wing. However, a cabbage moth, heart and dart and flame shoulder were all new moths for 2013. All taken this morning in a very wet trap after continual overnight rain.

First hawkmoth of the year

A warmer night gave me hope for some new moths. A poplar hawkmoth was the only new one, with a brimstone and muslin moth also present. Need some warmth during the day and overcast conditions at night. Seems conferring with other moth-ers that weather conditions throughout the south east is not good for trapping.

A visit to Amwell on Saturday 18th produced good views of a rather elusive wood sandpiper, that showed well fr the view point, but too far away for a worthwhile photo. Year lister 161. Also present were numerous grey herons and cormorants, plenty of common tern, a strangely out of place wigeon, few lapwings, 3 redshanks and a pair of little ringed plovers. 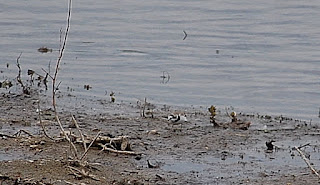 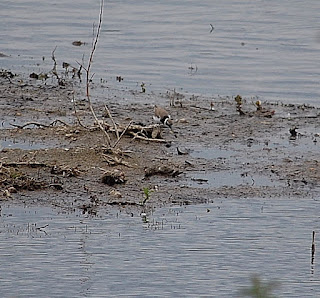 The moth trap remained virtually empty over the weekend evenings, with just a clouded drab and muslin moth roosting on the Saturday morning, whilst a new for year brimstone was discovered this morning. Suspect that it will be the first of many; a common garden moth.

Posted by Jono Forgham at 18:53 No comments:

New plant for the village

A walk around Bury Green this morning gave good views of both blackcap and garden warbler. The latter being my first record this year. Both in fine voice.


Other birds noted were the regulars: whitethroats, chiffchaffs, dunnock, green woodpecker etc + a calling reed bunting in Millennium Wood. However, of concern is the continued decline in willow warbler numbers. None were noted today in areas where in previous years they have been virtually guaranteed.
In woods near Bury Green, a new orchid was discovered: an early purple orchid (Orchis mascula.) 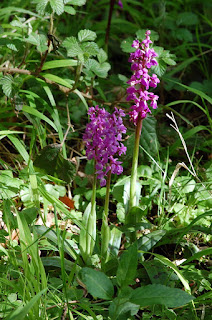 Butterflies were on the wing, with plenty of orange tips about, plus a singles of peacock, common blue and several speckled woods.

New moth for the year

Again, very few moths in the garden trap this morning. 2 common quakers as well as a first for 2013, a pebble prominent. A common moth that is on the wing at present and then a 2nd generation in autumn.

Posted by Jono Forgham at 08:29 No comments:

2 wanders today, firstly from town back to home and then a quick check around Hadham Hall and the lagoon.
Not too many birds due to cold and blowy conditions, but plenty of blackcaps and whitethroats were in fine voice from hedgerows, as were several yellowhammers. A reed bunting and a few linnets around the lagoon took the days total over 30 species and the local barn owl was in such a deep sleep he didn't hear me until I was close enough to get the best photos yet.
My main interest this morning was checking the lanes for May flowering plants. Most of the usual suspects were in bloom.

At the lagoon a herd of 6 fallow deer made their way, somewhat distantly, across wheat fields. 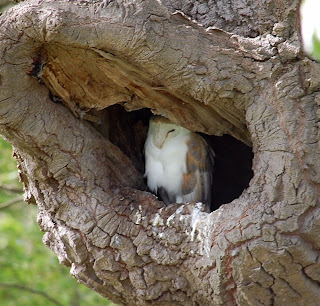 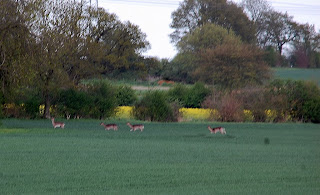 Posted by Jono Forgham at 18:27 No comments:

Still poor moth numbers, but some new ones!

A  new pug to be added to the garden list. Likely that this common moth has been overlooked rather than totally new. Identified by dissection as the whole pug family is by far the most complex to identify in the hand, unless the moths are in mint condition. An oak tree pug taken on 07.05.13, identified for me by Graeme. Many thanks. Also on the same night, a double striped pug, new for the year.
Also new for the year, a micro, garden pebble and a latticed heath were the only moths out last night.

Posted by Jono Forgham at 16:25 No comments:

New moths for the year

A warmer, if damp night, brought a small flurry of moths to the trap. A lesser swallow prominent and dagger species were new for the year. Also, another early grey (now rather late) and an, as yet, unidentified pug species.
Planning on a few hours out tomorrow night in local woods with head torch and net, hoping for good temperatures and cloud cover.

Weekend moth round up

Considering the weather and my attention to the trap (4.30a.m. checks) very disappointing results. Usual suspects in small numbers, common quaker, hebrew character, emmelina monodactyla, clouded drab, but also first for the year in the forms of waved umber, white spotted pug, nut tree tussock, muslin moth and beautiful plume.
One night soon there will be moths in large numbers, just need a warm day and an overcast night. Now have a powerful head torch so plan to wander woods and lanes at night with moth net to catch them on the wing.

Posted by Jono Forgham at 19:05 No comments: