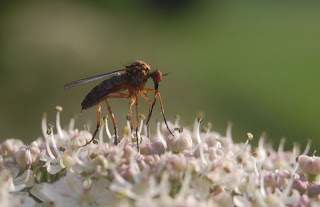 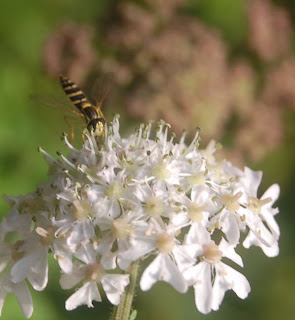 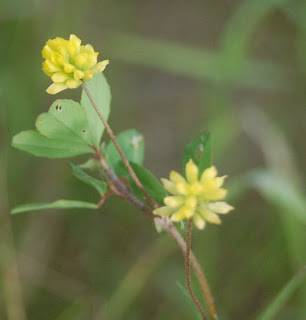 In grey light, I set off after work for a walk along the River Ash and then across the fields to the G.C. There, I checked the rough for plants and insects, discovering several some, as yet, unidentified. A new plant was photographed in the shape of hop trefoil,( trifolium campestre) a common plant with flowers not unlike small clovers. Plenty of this yellow flower can be witnessed all over the golf course rough.
A hoverfly feeding on cow parsley on the banks of the river was identified to the species eupeodes nitens
Birding was rather quiet, with 4 skylarks of note over the field between the golf course and the river. Swifts and swallows were also witnessed overhead whilst numbers were supplied by the jackdaws, with 150+ seen in the sheep field and adjoining hedgerow. Linnets were in trees on the G.C. and the green woodpecker family were feeding on the ant hills in the same field. I flushed an adult hare as I made my way towards the rough, where I recorded a new butterfly for the year in the form of a meadow brown. With some luck, I should record at least another 10sp of butterflies and goodness knows how many moths. The one depicted on the buttercup, seen by the river has yet to be confirmed as has the fly feeding on the cow parsley, also by the river. The flat heads of these plants are really good for attracting summer insects. Hopefully, some summer weather this weekend, summer solstice will offer the opportunity for more dragonflies, damselflies and butterflies.
The moth pictured resting on the buttercup is now confirmed as a 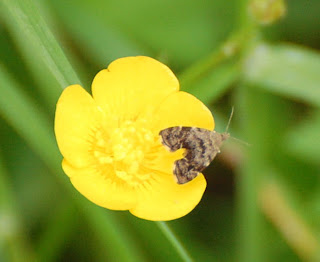 Anthophila fabriciana, a small micro moth with no English name. Also seen on clover on the golf course was another moth, known as nettle tap moth. A small white moth, that wraps its wings around it to mimic a small stick or blade of dried grass. The fly depicted on the cow parsley has been confirmed as a dance fly species, close relatives of the carniverous robber flies. Dance flies, as can be seen are vegetarian nectar eaters, having an elongated probosis to suck the nectar from flowering plants.
Posted by Jono Forgham at 19:39