2 firsts for the year in 10 minutes

Sometimes in nature watching you see nothing new for a while and then, for no good reason, several happen together. Yesterday afternoon was such an occasion with a visit to collect barn owl pellets near Hadham Hall. As I approached the lagoon a small copper flew by before settling for a few photos. Only 4th time I have seen one in the parish and this was a new site. A few feet further on I viewed the water of the lagoon and on the far side of the water were a pair of eclipse wigeon. This represented only the 2nd sighting of this over wintering duck. A good record indeed.
Little else was noted so I headed back, checking a few trees for leaf mines. A mine of Stigmella aceris was found on field maple at the site I was planning on setting the moth trap later in the evening.
When I returnedat 7.00, I set up and then checked the long ivy clad wall of Hadham Hall. By 9pm I had a very short list, so headed off to check Millennium Wood, where I recorded a single herald and then on to Westland Green. By now the temperature had dropped enough to see your own breath. An Acleris rhombana was the only moth netted, so back to Hadham Hall for a final check and to empty the trap.
Species list:
Hadham Hall:
Barred sallow (new for site)
Setaceous hebrew character
Angle shades
Common marbled carpet (new for site)
Lunar underwing (new for site)
Eudonia angustea (new for site)
Large yellow underwing

Plus Herald at Millennium Wood and Acleris rhombana at Westland Green

Posted by Jono Forgham at 19:14 No comments:

Autumnal moths and a few surprises

Mainly straight forward, regular fare at the moth trap of late: square spot rustics, setaceous hebrew character, Acleris variegana and large and lesser yellow underwings along with good numbers of lunar underwings.
In smaller numbers are brown spot pinion and beaded chestnut, but in amongst all these have been some better autumn flying moths.
Beaded chestnut was, in fact the 238th macro moth of the year, taken on 24th along with a much less common visitor, a grey pine carpet. The morning of the 26th, my 3rd of the year black rustic along with new for year deep brown dart, red line quakerand my forst autumn Acleris sparsana. The latter is a moth seen regukarly early in the year.
This morning, nothing new but 2 barred sallow were pleasing with a supporting cast of regukars as mentioned above as well as a brindled green, Epiphyas postvittana, and a real surprise, a Carcina quercana.
However, the most surprising was a moth not previously taken in Herts in autumn, although records do exist, a common quaker. This was a freshly emerged specimen. Its shape attracted it to me immediately, not a shape I was expecting to see in September! A very common May flying moth with about 100 records from this year alone.

Posted by Jono Forgham at 20:07 No comments:

In previous years, the lagoon at Hadham Hall has been an attraction for migratory birds, using the willows for cover and the water for drinking and refuelling on insects. A wander out there this afternoon gave just 2 chiffchaffs, several moorhen, a flock of 14 linnet, corvids, wood pigeons, 2 distant buzzards and 3 grey wagtail. Latter feeding at the water's edge.
Weather was not migrant type, too warm and still. For best results, need a strong easterly with occasional rain. Sunday looks better.
Butterfly wise, plenty of small whites along with this splendid red admiral. A solitary brown hawker was also noted near the small pond.

The game subbuteo got its name from the Falco subbuteo, the hobby as that is what the manufacturers of the table football game wanted it to become. Here endeth the 1st lesson!
A walk back from town today, my first for quite a while had me watching good numbers of chiffchaff but little else along the borders of East Wood. However, in the distance, I could hear juvenile hobbies calling. Last year they were to be found on the pylons between East Wood and Stocking Wood, the same again this year. They are so high up that photos were extreme, as can be seen here. 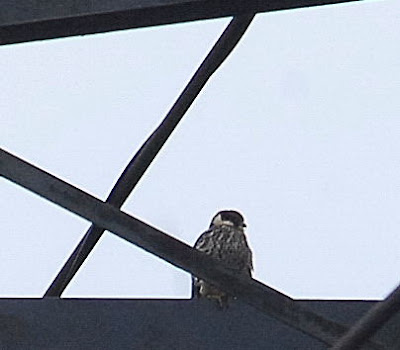 As well as these magnificent birds, little else of note. I continued to walk through Bury Green. Millennium Wood, the polo fields and down the footpath adjacent to Muggins Wood back to home. Green and great spotted woodpecker, nuthatch, more chiffchaffs, goldfinches, yellowhammers along with long tailed, blue and great tits were noted. On the polo field 200+ rooks and plenty of wood pigeons whilst overhead, a smattering of migratory house martins, but little else.
Ruddy and common daters by the River Ash and a migrant hawker near Muggins. Only butterflies were large whites along hedgerows and speckled woods in Millennium Wood.
Lovely walk and great to be out in the parish again.

Posted by Jono Forgham at 20:06 No comments:

We had a super turn out of locals for the moth night organised in Millennium Wood. Graeme and I set up plenty of traps throughout the 3.75 acre wood and, whilst Graeme and visitors Paul and Andrew monitored these and checked the brambles for feeding moths, I took the rest of the party on a wander around, netting anything that came to our lights. Only snouts and square spot rustics were netted but the children were excited to see them.
Most of the families had left by 8.30 and with little flying we spent time chatting and potting insects on the sheets next to the traps. Two members of Bishop's Stortford Camera Club spent time photographing potted moths.
We eventually began checking and emptying the traps around 11pm and had completed this and packed up just after midnight. In all 140 moths, with 3 to dissect to ascertain species.
List as follows

And the moths keep coming

The warmest September since 1929 and the hottest 3 days on record for September have brought a steady stream of regular moths to the trap. Monday night was cold and cloudless, so numbers dropped but Tuesday night saw an increase to over 50 trapped in the garden Skinner trap. Last night of note were new for year specimens of Agonopterix alstromeriana, Eudonia angustea and pale pinion. This followed on from the previous night when a Black rustic was taken, a first in the garden since 2014.
Total moths now identified this year stands at over 8400 and with several nights out with a variety of traps there is still a chance of reaching the original target of 10,000 moths in a year. 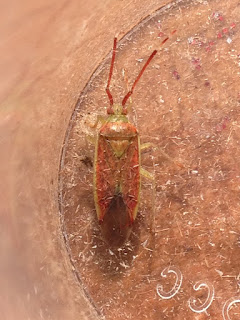 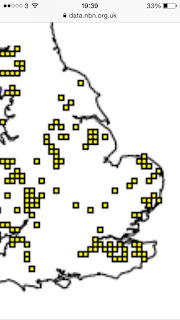 Sent from my iPhoneUpon emptying the moth trap this morning I encountered a colourful bug that looked like one of the mirid bugs.
A photo was sent to County Recorder and bug expert, Joe Gray, who confirmed my suspicions. It is indeed a Pantilius tunicatus, a seldom found bug as this map shows. The squares are tetrads where it has been recorded, a good find indeed.
Posted by Jono Forgham at 20:17 No comments:

The moths are still arriving in unprecedented numbers, with an all time high of 72 Setaceous hebrew characters taken on 9th Sept. This number dropped to 28 the following night.
A night trapping at Westland Green was hard going, running the trap from 7.15 until 11.30pm by which time I had identified 18 species from 85 moths, of which 50 were square spot rustics.
New for the year moths have been Epinotia ramella (5th) Nymphula nitidulata (6th) Brown spot pinion (8th) pale mottled willow and yellow line quaker (9th.) The last 2 showing that autumn really has arrived.
Total wise, the garden species list for 2016 is now up to 355 whilst in total, 8130 moths have been identified this year made up from 232 macro species and 210 micros.
Also of note, a sub species was taken in the garden trap on the 7th, a Silver Y diminutive specimen of the sub species gammina, shown below with a pen nib for comparison.

Posted by Jono Forgham at 09:34 No comments: