Setting off for North Norfolk at 5.30am saw me having the obligatory coffee at Wells Co-Op at 7.30 before I parked just East of the town and wandered down to North Point Pools. Several good birds had been spotted here over the previous few days, so worth a check.

3 birders were already present and had been there for over an hour and hadn't seen any Wood sandpipers. The habitat here is one of mud scrapes interspersed with plenty of sedge where a wader could easily be overlooked. I scanned the whole site but didn't turn up anything unusual so, after 45 minutes headed back to the car. A splendid sedge warbler posed in the hedge. The field adjacent to the path held 8 hares and a grey heron awoke from its slumber in a corner of the sedge.

Once back at the car I thought I would head to Cley beach for a sea watch, but apart from the expected gulls, Sandwich terns and cormorants only a small flock of Ringed plover went by. I checked the Eye Field where a distant Wheatear was perched on a post.I then parked at Walsey Hills and wandered down the East Bank to Arnold's Marsh but, again, nothing unexpected. Reed and Sedge warblers a plenty along with Reed buntings but no hoped for waders of note, nor Yellow wagtails around The Serpentine.

Back to the car having checked Snipes Marsh and off to Kelling Quags, often a good site for migratory Wood sandpiper. Hares all over the fields, chasing Carrion crows but clearly, not good enough as one crow was feeding upon a leveret, either it had killed or just died. Linnets everywhere here, Sand martins and Swallows over the water and a Lesser whitethroat sang unseen from deep in a hawthorn. I tucked myself away hoping for a photo but just the occasional glimpse. Whitethroats, Chiffchaffs and Blackcaps a plenty. A good site, this.

As I returned to the car near Kelling Reading Room and Teashop, an aerial battle was underway between 3 jackdaws and a Lapwing. Suspect the lapwing was distracting the corvids from its nest and was giving the jackdaws a good beating up at times. 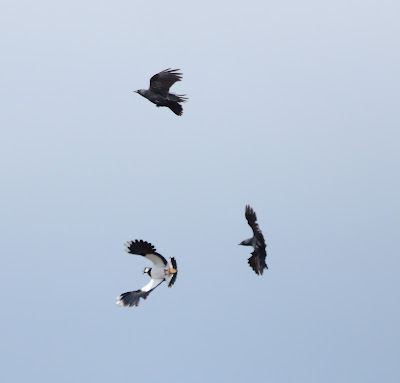 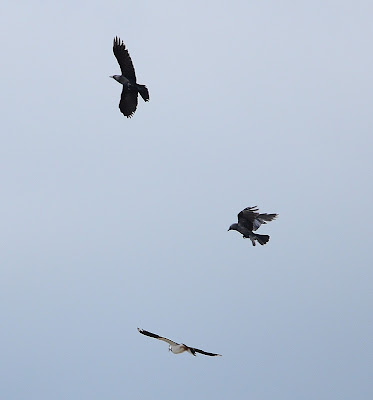 From here, I then decided to head west all the way to Choseley Drying barns, having bought food at Burnham Deepdale. As I drove by North Point Pools there were plenty of cars, indicating, perhaps some good birds were present. Later it was reported several wood sandpipers and 2 Temminck's stints were on site.
I arrived at Choseley Barns and enjoyed my picnic watching the inevitable Red legged partridge and several Marsh harriers. A bird alighted upon the wires: a linnet!
From here, I thought it would be good to visit a reserve I should really wander around more often: Holme Dunes NWT. There had been reports of a Montague's Harrier there the previous day so worth popping along and then having a good wander along the lane and back along the boardwalk. Always find something here. I was told the harrier had last been seen at 11.30am, flying high and out of view so I didn't expect a sighting. However, there were plenty of birders with their scopes pointing skyward. 3 hobbies patrolled over the village church and a Marsh harrier got beaten up by a Lapwing. Several guys told me they were on to the Monties. I followed their directions of left of the church, high over some poplars and came across a 2nd year herring gull! I checked with them and one agreed it was a gull. Another large bird caught my attention, probably 3 miles away which several of these guys claimed Montie's but, as can be seen from my photo which is cropped and same magnification of many scopes, I definitely wasn't going to agree with their id! 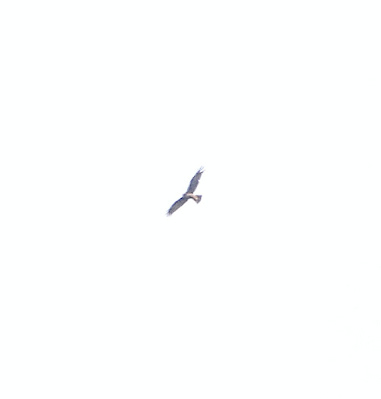 I moved on. A whimbrel flew in front of me and 2 Yellow wagtails patrolled the pools in the Konik pony field. Linnets again! Shelduck and much more: Large red damselfly, Peacock butterfly, Painted Lady, Small copper, Wall, and Holly blue but no hoped for Green hairstreaks.
I returned to the visitors' centre, gave in my sightings of the 2 wagtails and, in total, 2 whimbrel, along with insect records, enjoyed a cold drink and then headed towards the final destination: Titchwell. 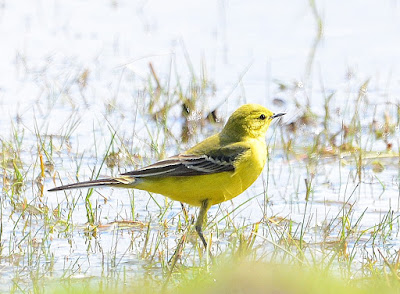 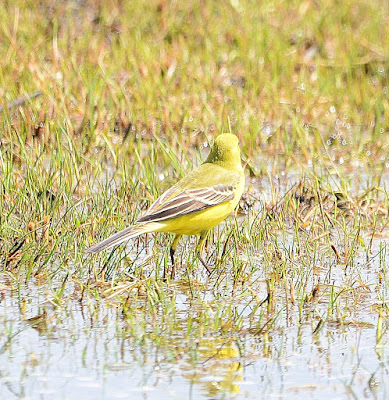 I arrived at Titchwell around 4.30pm, just as the car park was emptying and headed towards the sea, checking the Fresh Marsh etc en route. Usual suspects again but I was surprised by the lack of waders and that the Mediterranean gulls didn't appear to be present. There had been plenty a few weeks ago. By now, the clouds had rolled over and a stiff breeze meant I donned my jumper. Plenty of birds got on to the day list, not least of all, a distant pair of Little terns.
The beach was deserted and there were Sanderlings and Dunlins in various degrees of breeding plumage. A fine spectacle of an Oystercatcher flyby and several knot were noted.
Back on to the reserve and a scope check over the Freshmarsh. A confiding Sedge warbler posed for some photos before I headed back to the car park at 7pm, off to buy some fuel, a slight diversion off the A11 due to roadworks and home by 10pm
A long day but great fun. Whilst I am keen to see rarer birds I don't chase them around when up in Norfolk or elsewhere. If I encounter them then that's great but just to wander around reserves and bird rich habitats is what I enjoy. Always the chance of something unexpected being found.


Species:
Posted by Jono Forgham at 11:54 No comments:

Yesterday, after leading a dawn chorus walk I popped over to the lagoons and Stansted Airport. Lesser whitethroat, heard and seen very briefly was a highlight along with 2 Shelduck, Common sandpiper, Grey wagtail and Little ringed plover.


Today, I had the morning free so off to Lackford Lakes near Bury St. Edmunds. Breezy and poor light conditions meant little was photographed and then, not very pleasing set. Few here. Cuckoo and Swift made the year list.

Posted by Jono Forgham at 14:23 No comments: