A day off so a chance for an early start for North Norfolk. Having checked the moth trap at 4.00a.m. and closed it, I set off and was at Titchwell by 6.45. Good early morning light made photographing Thornham Marsh easy but hard on the Fresh marsh. I headed for the beach, having checked the reedbed by the island hide for the reported spotted crake. Nothing there apart from lapwings, moorhens, avocets and black tailed . On the brackish marsh I surprised a spoonbill and actually managed to get some photos of the bird actually moving, rather than a flight shot or one of them sleeping. 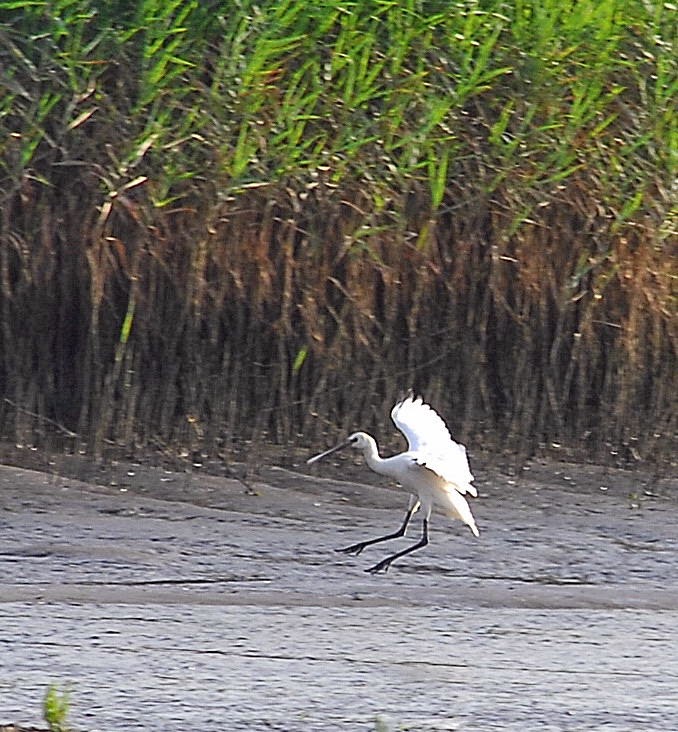 At the beach there were some eiders quite close in and sanderling and dunlin along the surf. In the distance towards Brancaster were 100's of sandwich terns fishing whilst in the opposite direction, 11 arctic skuas towards Thornham, but too far for a worthwhile shot. The recently reported long tailed skua was not to be seen, so back to the Parrinder hide. Here, numerous ruff, avocets, greylags and a few little ringed plover. All good birds and now a few other birders were arriving.

I left the Parrinder hide after quite a while where I had grilled all the waders but only had regulars. However, from the path, a smaller wader with ruff; a wood sandpiper. New bird for the year and gave good binocular views, showing a bright spangled plumage. Off to the island hide where the spotted crake had still not been seen. The hide was reasonably full but no one was actually looking for it. After 10 minutes, it showed, but still within the confines of the reeds. It was on view for about 20 seconds before heading back and out of sight. Apparently, it showed really well in the late afternoon, by which time I was elsewhere.


After a quick wander around the meadow trail I had a quick look through the contents of the moth trap before having a walk along the footpath at Choseley. Yellowhammer added to the list along with wren, robin and blackbird but plenty of activity with harvesting probably disturbed the birds, so off to Holkham. After a wander of several hundred yards, it was clear there was very little about apart from blue and great tits, so back to the car and off to Cley.
Picnic bought and eaten at Arnold's Marsh along the East bank. A bearded tit flew by and there were several 100 sandwich terns on Arnold's along with regular waders. I then fancied a bit of sea watching and although there was little movement: sandwich and common tern, cormorant, solitary knot, oystercatcher and curlew and several cormorant, I enjoyed just resting on the beach and watching the world go by. 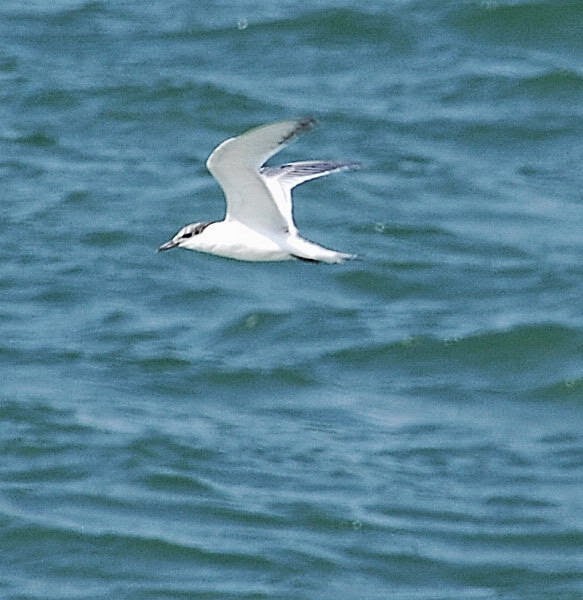 From here, I returned to the visitor's centre for a coffee before visiting the hides. Green sandpiper was added to the list as was a fly through hobby, too quick for my camera. More regular waders, with good numbers of ruff and black tailed godwit.
From here, I went around to the beach for another sea watch, but more of the same so a quick trip to Kelling Heath, which was birdless so a brief visit to Gramborough Hill where again, nothing new was added.
By now, my 4a.m. start was beginning to tell, so back to the car and home by 8.15pm.
In all, 72 species which is not too bad for July and 3 year listers in spotted crake, wood sandpiper and arctic skua.

Posted by Jono Forgham at 21:59 No comments:

Milestone reached today, with the 100th micro being recorded from the skinner trap in the garden. A good selection of new micros in quite an empty trap, as expected after the previous night's torrential rain.
New for me were: Dioryctoria abietella and Dioryctoria simplicella whilst Yponomeuta malinus, Acleris corylana and Acleris variegana were new for the year. The only new for year macro was a small waved umber.
In all 35 species (17 macros/18 micros.) Another unusual macro was a superb flame carpet that was posing well for a photo until I reached for the camera. 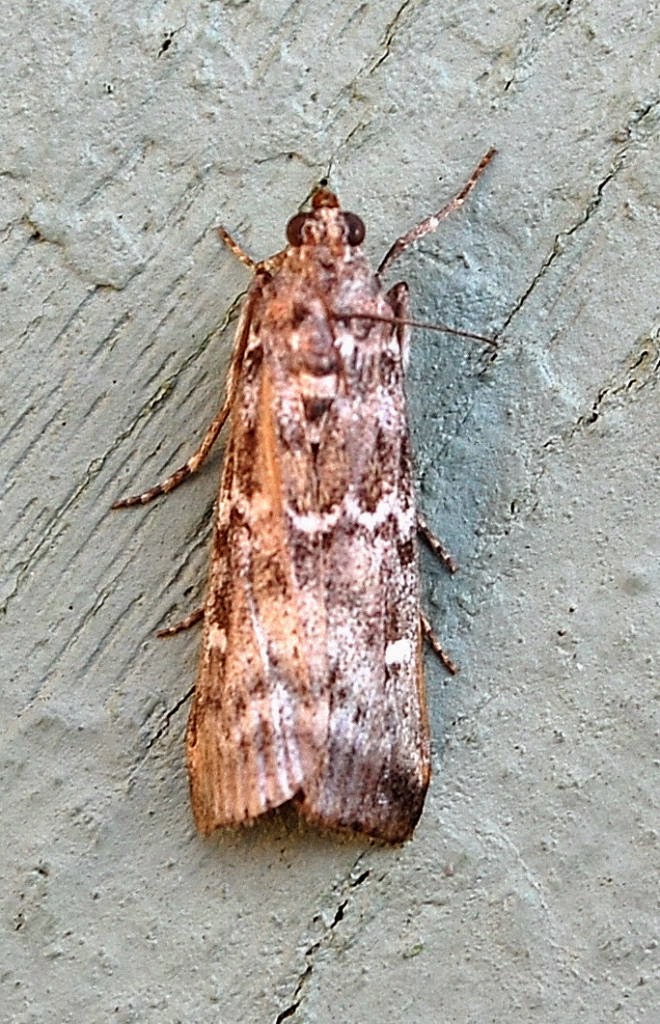 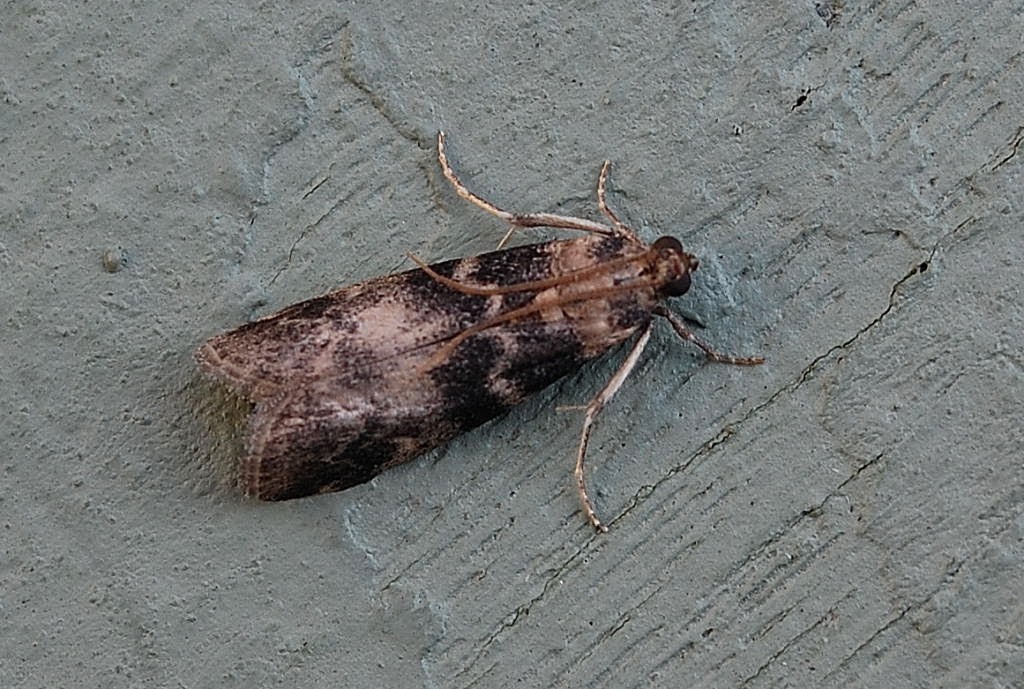 Posted by Jono Forgham at 08:32 No comments:

The trap was running well at midnight, with several interesting moths potted and many recorded upon arrival. However, a huge overhead electric storm and torrential rain meant that I couldn't get to the trap at 4.30a.m. as planned, so back to bed and a late arrival.
Inside, was carnage. Many were just unidentifiable, no scales left and translucent, albeit still able to fly. Unfortunately, many roosting on the lower parts of the egg boxes had drowned or were stuck to the cardboard and also unidentifiable. All in all, I was lucky to get to 43 species (20 macros, 23 micros) of 71 moths, with several new for the year records and one new for me:  Ypsolopha scarabella. A well marked individual at that. See below. Also, new for me was a Coleophora hemerobiella.
New for the year were barred red which was badly worn but recognisable, Acleris asperana which a bird had tried to eat so some missing, see below and a late id from yesterday, Scorparia subfusca.
Numbers were supplied, inevitably,
by riband wave, dingy footman and Pleuropyta ruralis

Posted by Jono Forgham at 10:54 No comments:

New micros and a recount of totals this year

A busy trap, both last night up until 12.30a.m. and then again this morning. In all over 80 moths of exactly 50 species. New macros for the year were hoary footman and cabbage moth whilst Strophedra weirana, Cochylis atrcapitana, Yponomeuta padella, Agriphila tristella, Catalysta lemnata and Pyrausta aurata were new for the micro department.
SAfter checking through all records for this year, I have revised figures due to counting certain species more than once etc. Now at 163 macros and 93 micros for the garden this year, made up of 2059 moths.

Another hot and sunny afternoon, so I wandered over to the lakes around Hadham Hall with cameras, binoculars, pots and insect net.
Plenty of common blue damselflies (1000's) as well as a few darters, black tailed skimmers and emperor dragonflies near or over the water. Plenty of photo opportunities.
At the main lake, a cormorant and several large but dead rainbow trout. Shall report this to the landowner tomorrow. Maybe the heat but may be something more sinister.
Green woodpeckers, linnets, a barn owl. goldfinches, swallows and house martins were all knocking about and the song of the yellowhammer was a constant companion.
On the butterfly front: gatekeeper, common blue, small and large white, peacock and meadow brown.
A lovely, peaceful couple of hours just sitting, watching and drinking a bottle of beer. 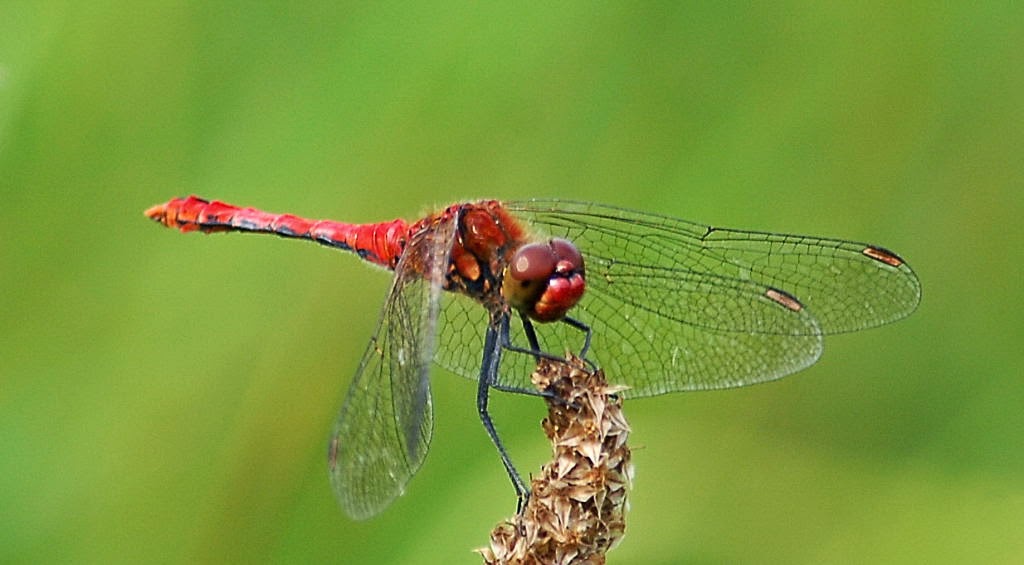 Posted by Jono Forgham at 20:19 No comments: