First micro of the year

A visit to the garden trap this morning offered 2 more moths, an early moth again as yesterday and my 1st micro of the year. Either Acleris ferrugana or notana. Difficult to separate just by visual check and requiring a gen det to be sure. Strangely, checking in my 2 books, this looks to be Ac ferrugana judging by the illustration in Sterling and Parsons whilst in Manley's photographic guide looks much more like Ac notana! The straight edge of the termen hints at notana whilst the darker areas on the costa hint at ferrugana!
2 photos here in slightly different light conditions.
Now with GJS so will be sure later today, I suspect.

As it looked like being a mild night I ran the trap and was rewarded with 2 species this morning. Both expected moths for January, an early moth and a pale brindled beauty, both shown here. These represent my 3rd and 4th species for the year.

Set off at 5.15 only to discover the slip road on to the M11 was shut until 6, so had a coffee at the services.
Arrived and went sea watching. It was blowing a gale and heavy showers were forecast, so wanted to get in as much as possible before the rain. From outside the sea watch hide there were 1000's of razorbills heading west and 100's gannets milling about in the strong wind. This made scope viewing difficult.
After 45 minutes I headed off to the ARC pit but plenty of water meant usual suspects, mainly wild fowl, so off to the RSPB Reserve in heavy drizzle. Coffee in the VC before heading to the nearby Dennis Hide. From here, great views of slavonian grebe and a drake smew, but much too wet to get the camera out. It was at this point I realised I had brought a batteryless camera, so was expecting superb views of something good.

Only 2 sessions of birding, on the 3rd a brief walk around the parish and then yesterday, North Norfolk. As usual, I have no targets for a year list, but always happy to pass 200 species in a year. Last year 204 and in 2014 223, both lists contained good birds such as glossy ibis, little bittern, osprey and spectacled warbler. Whilst not a twitcher in my terms, I do visit rare birds if I happen to be in the area for a day's birding e.g. a day in Norfolk and the spectacled warbler was still present after a week or so, therefore shame to miss out. I had planned a Norfolk day anyway on that occasion and not too fussed if the bird had left, as it did 3 days later.

North Norfolk in a few hours.

Setting off at 5a.m. meant, having stopped for coffee near Downham Market, I was in Titchwell carpark way before 1st light, as planned. My idea was to be on the beach for sunrise and spot as many birds on the Freshmarsh in the pre dawn grey light as possible. With only a few hours of decent light, I wanted to get the year list off to a good start by paying visits to all the Norfolk Coastal hotspots.
I was greeted with both song thrush and mistle thrush singing, before I checked the feeders, but too early. This photo of the regular barn owl is testimony to the light levels!
I scanned the freshmarsh, picking out many of the usual suspects: godwits, avocets, brents, teal, shoveler, lapwings etc before arriving at the beach just as the colour was changing, promising a bright day.

From the beach the waders at the low tide mark were easily visible as the light improved rapidly: grey plover, sanderling, turnstone, dunlin, bar tailed and black tailed godwit along with gulls and geese. 2 mute swans headed west but only a few goldeneye, 7 common scoter and 2 red throated divers were noted on the sea.

A few poor light shots were taken at ISO 2000 but not many worth bothering with. A quick scan from the Parrinder Hide and then a check on Thornham Pool. The latter gave views of 2 water pipits with 5 meadow pipits before I checked the feeders again, a chiffchaff on the path to the car park and I was heading off to Choseley.

Here, red legged partridge, yellowhammers, greenfinches, chaffinches and goldfinches along with skylarks, pied wagtails and 2 corn buntings. Then, off to Chalk Pit Lane but no views of the hoped for rough legged buzzard, just more black headed and herring gulls and a large 35+ covey of more red legged partridges.
I stopped off at Brancaster Staithe but the tide was so low that no self respecting red necked grebe would be fishing in the few inches of water, so, after a scan at Burnham Overy Staithe and Lady Anne's Drive, I arrived at Wells. Here, a solitary little grebe made the list but good to see brent geese and lapwings on the football pitch.
I decided that a walk down Garden Drove would be far too muddy, likewise a wander to the Gibbert Roundabout at Stiffkey, so off to Cley beach, where the sea was very quiet. I then headed to the VC where very little had been reported so I carried on to Salthouse beach. Upon parking, I noted a large, light brown streaky gull with light primaries. Thought it maybe one of the Iceland gulls that have been around the area recently, but on closer inspection, no, a  2nd year glaucous gull. Back to the car for the camera just in time to see it fly off to the beach, where it then departed over Gramborough Hill with 2 great black backed gulls. It looked to go down in a field near Kelling Water Meadows.
I then began scanning all the gulls, coming across an interesting individual, very pale with large bill and dark eye. It wasn't until it flew that I noted a 2nd year great black backed gull, almost black mantle just emerging.

Having checked all other gulls, I had seen a huge flock of 5000+ geese in fields near Kelling, so off to a layby where I could scan the whole lot. After half an hour, under darkening skies, I came across the target: 6 tundra bean geese. One that didn't make my year list last year, so pleased to find them. In an adjacent field, some 1000 brent geese before I headed off to Cliff Road car park at Sheringham and a quick march down the steps to check the purple sandpipers by the Funky Mackerel cafe. Sure enough, both were present, along with the very confiding 25 turnstone flock that appear to be fed seed every day.


I just had time for a quick trip to West Runton cliffs for a final sea watch where 2 guillemot and 3 gannets made the day list. As I made my way back to the car the first heavy drops of rain fell and so I headed off along the A148 to Fakenham and then home. A good day, with 86 species making the day list. 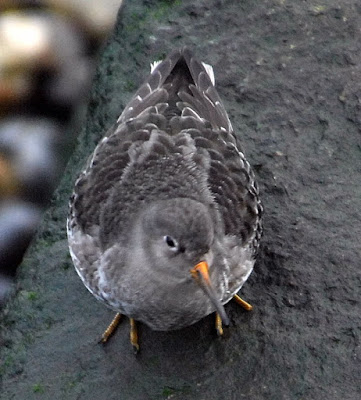 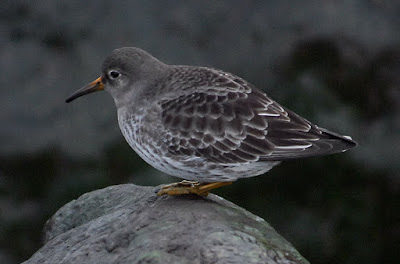 A good day list to kick off the New Year.
Posted by Jono Forgham at 21:58 No comments:

Set off in very light drizzle for a walk that was curtailed due to the rain increasing as I found myself on Ash Valley GC. In all, 26 species were noted, the highlight being a recently arrived pair of stonechat in the ditch and around the rough between the 6th, 7th and 13th hole. This is a regular overwintering haunt for this species, but good to see, nevertheless.
Bullfinches around Valley Fields along with a calling nuthatch and common buzzard. In the garden, coal tit and long tailed tit got the year list off to a reasonable start. Tomorrow, an early year sortie to North Norfolk, so the list should be up around 100 species fairly promptly this year. The last 2 years we have been away in early January and so may have missed out on several typical Norfolk species.

Posted by Jono Forgham at 18:56 No comments: