After the rush of moths within the first 2 weeks of July, it has now gone amazingly quiet. Numbers this week: Monday 89 moths, Tuesday 32, Wednesday, 35, Thursday 22! This is mainly due to colder days along with clearer nights so the temperature continues to drop and the fact there is almost a full moon, so not too dark.
Therefore, mainly typical late July moths, with the bulk of the catch being common rustics and Agriphila straminella.
However, an Agapeta zoegana was new for parish records on Wednesday morning. Today, I spent an hour netting at Westland Green and, again, Ag straminella in big numbers. shaded broad bar, latticed heath and a new for year Agriphila tristella were all I got, along with peacock, small skipper, Essex skipper, small and large white.
A single dotted wave from the trap this morning was moth number 3500 for the year.

A whole day in North Norfolk, leaving home at 5a.m. after the moth trap had been checked. A coffee near Ely, as usual meant I was at Titchwell before 7a.m and the only one on the whole reserve. A slight, light drizzle and north westerly breeze meant I wasn't expecting too much, but this reserve offers so much, there is always something to see and hear.
A check around the car park trees gave up little (a male golden oriole was recorded hear in the late afternoon!) so on to the reserve. Waders galore on the freshmarsh, but before arriving to check these, a wood sandpiper called and flew off north towards the coast, over Thornham grazing marsh. I suspect it rose unseen from the mud and pools on Thornham Marsh. First year lister. The light was not good for checking Freshmarsh etc, so off to the beach. Breezy conditions with a good swell meant hard to view through the scope. Huge numbers of oystercatchers on the beach, along with sanderling and turnstone with several curlew and bar tailed godwits.

Back on the reserve regular fare was noted: reed buntings and linnets over Thornham way, looking towards Holme, skylarks, little egrets and curlews in the ditches and a constant flow of black headed gulls. Into the Parrinder hide and plenty of avocets, black tailed godwits with smaller numbers of bar tailed. In amongst a party of 15 feeding ruff were some dunlin and a solitary curlew sandpiper, showing the fading summer plumage and emergence of the tell tale white supercilium of winter plumage. The white rump showed as an unseen raptor or predator put all waders and terns up. A few sandwich terns and moulting common terns before I headed back for the opening of the moth traps. Having been a breezy and cold night, low expectation of the contents was proved correct, but an old lady and purple thorn were good to see. Another coffee and the Titchwell special bakewell tart had me raring to go. As with my previous trip, I then decided to head east to Cley, check out the Cley square and then just pop into other noted sites.
As I drove along the A149, at reference 835435 an owl sp caught my eye shortly after the sharp left hand bend. I turned as soon as I could, parked and checked the field. Nothing of the suspected barn owl, so back to the car and onwards. After 25 yards, the owl was again seen, now on the right hand side. Fortunately, a parking spot and I was out, firing off many photos. A superb sight, which I enjoyed for  half an hour before the presumed 1st year bird disappeared from view. Over 130 photos taken, which was soon reduced to 20 in the car and then even fewer on the laptop! 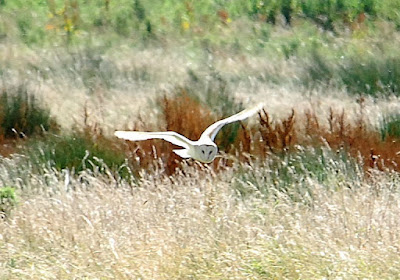 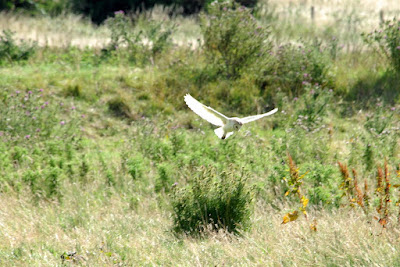 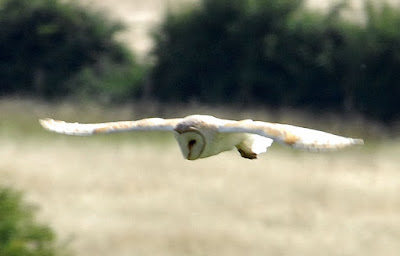 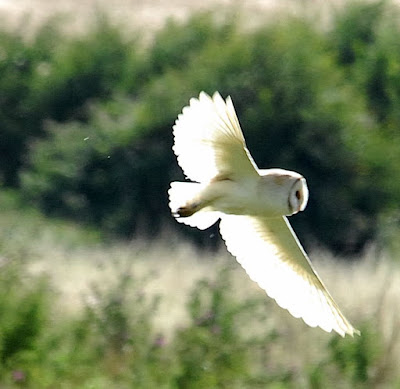 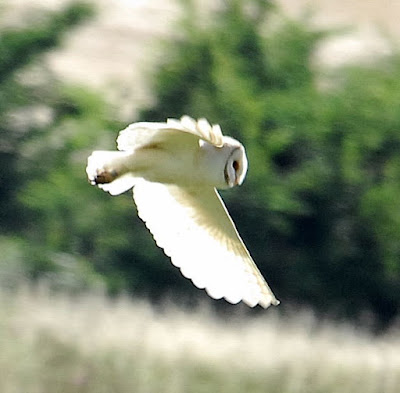 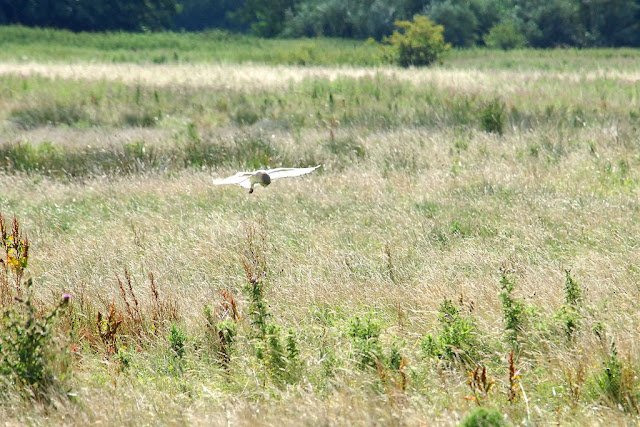 Before Cley I popped down to Stiffkey Greens for a quick scan. A distant spoonbill was added to the list, but nothing else of note, so onwards.
At Cley, a  wander along East Bank was worthwhile, with Arnold's Marsh holding over 200 sandwich terns, curlew, cormorant, redshank, avocet but not the 300 whimbrel that some swaro carrying camo clad birder had informed me of as I photographed a rather worn sedge warbler on the east bank by the car park. 300 whimbrel would be incredible, (unheard of, I suspect) but there were several hundred black tailed godwits, so, mis-identification from a new birder, perhaps.

From here, after the 3rd coffee of the morning and managing to get away from the book shelves without making a purchase, a side trip, firstly to Kelling Heath, but just a few finches etc on show and then to Sheringham cliffs, but nothing of note during a 20 minute sea watch so back along the A149 to Kelling and a wander to one of my favourite quiet spots on the coast: Kelling Water Meadows. This is always a pleasant walk but little of note in the high hedges before the water meadows. A good site for wood sandpiper, but clearly not today, as there only were plenty of black headed gulls and a few of the now dangerous and infamous attack gulls formerly known as herring gulls. I left unscathed!
Stiffkey Fen was next on the agenda, another quiet and relatively unbirded site. Here, a moulting med gull made the day list and waders such as godwits and avocets were noted. Teal, gadwall, mallard were evident and several egrets and a grey heron. The latter having issues with a family of greylags. A scope scan of Blakeney harbour offered little, so a return to Cley for an afternoon sea watch and, if time permitted, a quick visit to Daukes Hide on the reserve.
Nothing on the sea, so off to the hides. a green sandpiper from Daukes, briefly and a little ringed plover made the day list as I scanned through endless ruff and godwits for any unusual waders. There were none, so a slow wander back to the car. The light had not been good for most of the afternoon, with a couple of light rainfalls, but nothing as predicted on the met office weather forecast on Radio 4 earlier in the day. Strange these forecasts, as the BBC website, as viewed on Monday evening, was spot on for Wednesday whilst the morning forecast for that day, on the BBC was clearly not correct!
Off to Wells to meet Gary in The Edinburgh for a couple of jars before heading home. Good to catch up again with Gary, but due to tiredness, increasing old age and basic forgetfulness, I bought 2 pints and promptly forgot to pick up my wallet from the bar. This error was not noted until I arrived home, a few hours later and a phone call to The Edinburgh informed me that they could not find it. Consequently, cancelled bank cards, £50 lost and more importantly, a few old photos and driving licence, the latter which of course can be replaced. Silly sod!!
All in all, apart from my error at the end of the day, a great day out and a pleasing set of photos. Strange how sometimes you get a good set, whilst for no apparent reason, you return on occasions with a poor and disappointing set that really are not worth putting here. 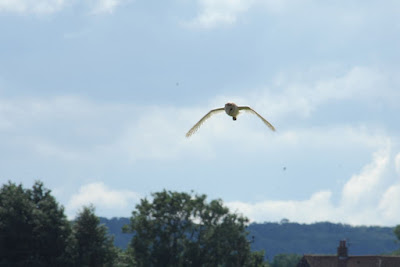 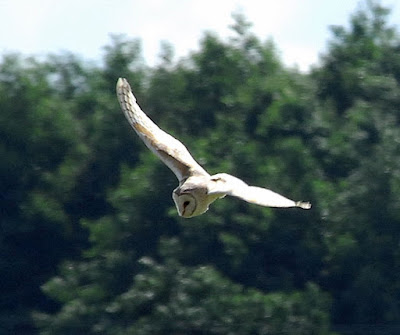 Graeme, Steve and I set up a series of 6 traps throughout Millennium Wood near Bury Green TL447216 and were ready to start netting at dusk. We had a good turn out of 6 locals who had come to see what we were catching. The weather was spot on, having been sunny all day and the evening turning overcast. A mild evening somewhere around 14C meant there were plenty of moths attracted to the sheets, traps and head torches.

Huge thanks to Graeme for the dissections of the rarer and tricky micros and thanks to all who turned up and helped catch and empty traps. A thoroughly enjoyable evening. Next one: Wednesday 26th August. Venue to be confirmed, but planning on seeking permission for a new site within the parish.
The results as we emptied the traps around 11.30 were really pleasing: 401 moths of 86 species. Not a bad return for such a pleasant evening.

Posted by Jono Forgham at 09:12 No comments:

Weather last night was perfect for mothing, so I stayed up until 1 and returned to the trap shortly after 5. Usual procedure, pot any I was unsure of and list all others. Consequently, quite a few to id this morning before emptying the trap.
On the macro front, new for year were: Dusky sallow, lesser broad bordered yellow underwing, small waved umber, small fan-footed wave and flounced rustic, whilst microwise: Hysopgia costalis, Aclersi forsskaleana, Plutella xylostella were new for the year whilst new for parish records were Argyresthia pruniella and Aethes rubigana.
In all: 190 of 81 species.