Wednesday 26th June found me boarding the 21.30hrs overnight direct flight to Colombo, arriving 12.45hrs. Here, I met my driver, Navinda and we set off for the 4 hour drive north to Anuradapura where I was based at Lievi's Guest house for 3 nights. In total, home to guest house took just under 24 hours, so a cold beer and out for a meal. Chicken curry and rice for £3.00 before I found a hotel where I could enjoy a few more beers. Here, I was invited to have an evening meal on the following night before returning to my room for some much needed sleep.
Woke early next morning for a wander around  before heading off at midday to the Sacred City a few miles away. Absolutely stunning place, some 2500 years old. Also, came across a few lakes, or tanks as they are called locally and spent some time checking the birds: Black headed ibis, black winged stilt, Lesser whistling duck and many egrets and grey herons. Several Brahminy kite overhead, too. Highlight was a distant marsh sandpiper, too far for a heat haze effected photo but its needle like bill was visible. An unusual bird to see here in high summer, usually found further north at its breeding grounds.

Friday and an early start to drive for over an hour to Wilpattu National Park, west of Anuradhapura. At this time of the year there are just resident birds present. Species numbers are boosted in winter with over 200 migrant species arriving throughout the country, so I was not expecting too many birds on this jeep safari around a very large reserve (over 500 square miles.)
However, upon arriving I got 2 new Sri Lankan birds for me in the car park: Sri Lankan woodshrike and Small minivet. Also, a Malabar hornbill was present before we climbed into the jeep and off for a 4 hour drive around. In reality we should have arrived here at 6.30am but after the long flight the thought of getting up at 4.30am was none too appealing.
Into the park and immediately, a pair of Ceylon (or red) jungle fowl giving me the chance to improve on the photo of the last one I saw, in Yala National Reserve back in 2014. Then, superb views of 2 Crested hawk eagles, a juvenile right next to the track. Great photo opportunity. Little green bee eaters were everywhere as we continued along very bumpy and dry tracks. Indian spotted deer, Barking deer (muntjac) and Sambur deer.


We continued, checking tanks and man made water holes but not too much. Red vented bulbuls whistled as we drove by and on the tanks: Lesser whistling duck, 100's of Painted storks, black headed ibis, egret species and spot billed pelicans. One solitary elephant was observed along with crested serpent eagles and more crested hawk eagles, this time adults. Then, another new bird for me and one that is a scarce resident; a Grey headed fish eagle. Again great views from the jeep


We moved on and I spotted a white throated kingfisher not too distant with what looked like a dragonfly or cricket species in tis beak. This was the following sequence: 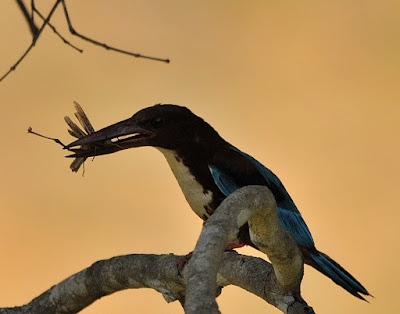 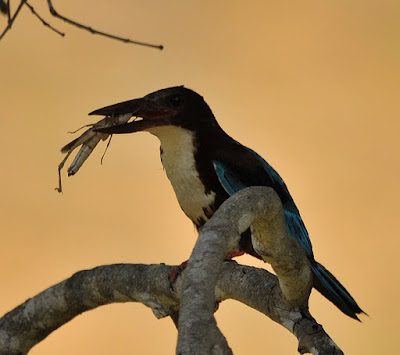 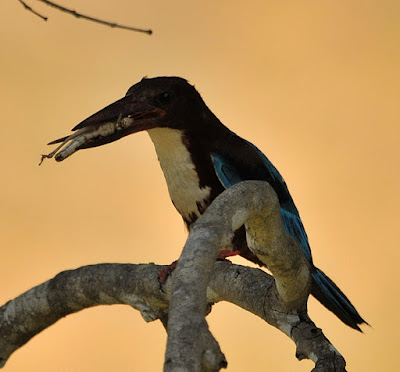 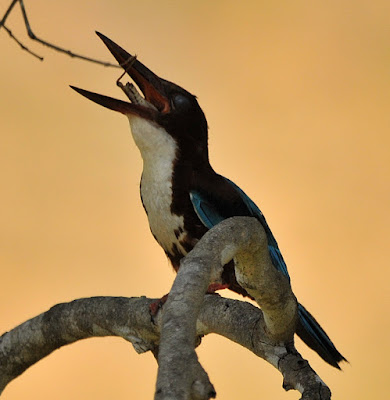 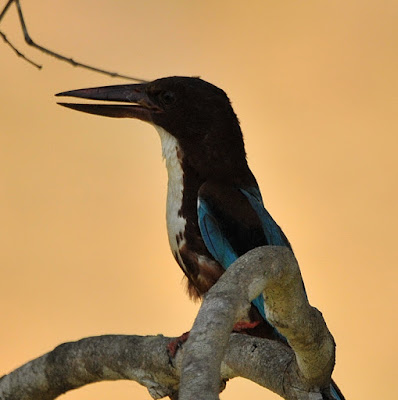 We completed the tour and got back to the car park. A search for a previously heard but not seen woodpecker species was unsuccessful before our driver invited us back to his house for a mucj needed cup of tea before the trip back to Lievi's Guest House in the city. A brilliant bird watching session.

The following morning Navinda drove us to Negombo, some 4 hours away through Puttalam and Chillaw. Here I met up with two of Sri Lankas leading naturalists: Anoma Alagiyawadu and Hemantha Gunathilaka at the Jetwing Blue where Hemantha is Naturalist in Residence. Great to see these two again, Anoma having coming all the way from Galle for an evening meal before heading back home later that night.
The following morning I was up early and headed off to check a small tank the otherside of the road. Pleased I did as a Black crowned night heron was another new Sri Lankan bird for me along with regular species such as Little cormorant, red wattled lapwing, Asian Koel etc. Lovely little habitat.


Navinda then completed driving me by taking my down the Southern Expressway to Hikkaduwa where I had no trouble in finding a room before getting a lift with Anoma into Galle and a visit to Jetwing Lighthouse to see staff Wendy and I know from previous visits and also to plan my last few days.

Anoma oversees a learning centre, MidGarden and I hoped to pop in to see students at work. It was only last November that I was there, leading sessions for these students so really looking forward to seeing those from previous lessons along with new ones who have just started to come along to MindGarden.
On the Tuesday, following visiting the session, Anoma and I headed off to Koggala some 15 miles east of Galle where I have previously stayed and bird watched. Coincidentally, the tracks I followed back in 2017 were the very ones Anoma drives along to collect his wife Anusha from work at a Managerial College. Some regular Sri Lankan birds along this track before a quick visit to Kogalla Lake. By now it was heading up to 35C so we beat a hasty retreat to the splendid Fortress hotel for a cool beer and I also took the opportunity to catch up with Siri. He used to run a lovely little roadside fish restaurant, but no tourists in the area for a while have, sadly, put him out of business.
Lovely to be back in this area again before we returned to Galle. On the Thursday I had planned to take the afternoon train to Colombo for my final night, but a train strike meant Navinda was press ganged into service and drove me all the way.
Just great to be back in Sri Lanka again and to visit several new places and also record a few new bird species. My species list for the country in just over 150 species now. Awinter trip North to Jaffna and a visit over to the east along with a visit to Sinharja National Reserve will push the list way past 200! I'll just have to go back again!!

Friday meant a taxi to the airport and a 10 hour flight home followed by over an hour on a National coach before Wendy met me at Stansted airport near 11pm, some 19 hours after I had left the hotel in Colombo. I slept well!
Posted by Jono Forgham at 16:08 No comments: