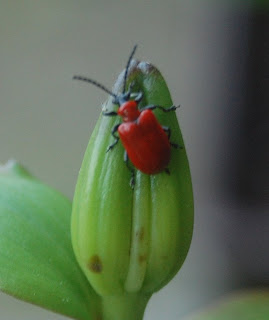 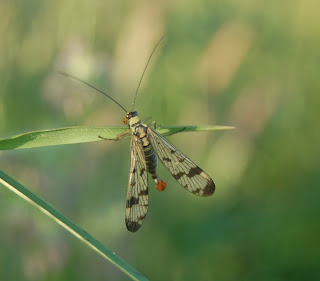 A wonderful short walk this evening , searching mainly for insects, came up trumps. A walk along the Ash to the footbridge by the pumping station and then checking the ditch up to New Road was sufficient for several new species.
An unexpected bird was recorded near the footbridge in the form of a singing sedge warbler. First for the year and not one that I had anticipated. Common along the River Stort Navigation, with up to 8 breeding pairs around Thorley Wash, it was a real surprise to hear one singing from the hedgerow. Usual birds were present, with yellowhammers calling, whitethroats and blackcaps scratching their tune from the bushes and corvids overhead.
A garden pest was discovered in the form of a lily beetle, (lilioceris lilii) feeding on the garden lilies. A bright red beetle that chews through buds of lilies. The larvae cover themselves in their own excrement to mimic slugs or bird excrement. Check your lilies and wash them off with soapy water or pick them off by hand; they won't fly if disturbed!
Also, I managed to improve on a photograph of a scorpion fly ( panorpa germanica). The photo here depicts a male, with its diagnostic "scorpion" end to its abdominal segments. Totally harmless, just basic scavengers. 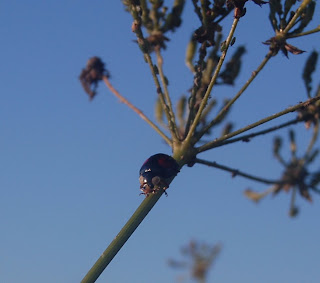 Also shown today are photos of a strange ladybird that I have yet to identify. I suspect a young beetle, yet to emerge into its full colour, but very similar to the pine ladybird, ( exchomus 4-pustalatus) that I am sure it is not, due to habitat. I shall endeavour to name it to species. Also recorded for the first time this year was a brief glimpse of a blue tailed damselfly by the footbridge. A search for a considerable time gave no good photo opportunities, but in the process of crawling around the undergrowth I:
a) discovered a large population of wild majoram (origanum vulgare) a super herb with meat and basically a wild oregano. I shall be cropping a short selection soon.
b.) a newly emerged speckled wood butterfly. Again, patient attempts to record a good capture of this proved unsuccessful. 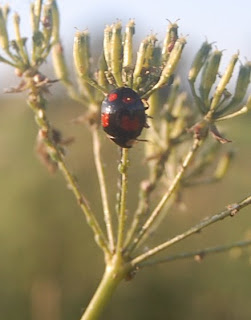 Also of note, I recorded 2 new mammals over the weekend. Firstly a weasel ran for cover whilst hunting on Brick Kiln Hill while I was having a smoke outside the Nags Head and then later in the garden, also partaking of the evil nicotine, a pipestrelle bat was feeding under the apple, plum and lilac trees. A borrow of a bat detector will determine whether it is a 55khz or 45khz species.
Posted by Jono Forgham at 23:17