My regular route from town back to the village this morning. Not much on offer in blustery conditions. A green woodpecker near Green Street, yellowhammers in hedgerows and treecreeper, GSW, common buzzard and nuthatch in Muggins Wood along with blue, great and long tailed tit.
A coal tit showed well in Chapel Lane and a few chiffchaffs calling were all the birds worth noting.
In Great Plantings Wood near Tescos, the annual show of superb wood anemones has begun, but no other new spring flowers noted this morning.

Lunchtime visit to Amwell in grey and blustery conditions. At least 7 chiffchaffs calling as I wandered to the viewpoint, from where shoveler, great crested grebes, gadwall, teal, mallard, lapwing, tufted duck, grey heron, pochard, cormorant and assorted gulls (mostly BHG)  were all noted. However, on the island, 2 oystercatchers whilst a little closer, a redshank. Both good birds for land locked Hertfordshire.
Several common buzzards overhead and 3 red kites. A cetti's warbler was heard from the James Hide where also, long tailed, blue, great and marsh tit were on the feeders, with a reed bunting nearby.
A quick check for water voles was unsuccessful but a single snipe was seen from the walkway to the White Hide.

Yesterday, I managed to pop out to check on the sallows around Hadham Hall as this is a good area for early migrants. Just 2 chiffchaffs calling from the goat and grey willows that border the irrigation lagoon on local farmland near New Spring Wood.
Nothing else of note and no birds on the water. The crow scaring gas gun is still in an adjacent field, firing every half hour for over 3 weeks now, so no wonder little is to be seen. I have yet to make contact with the resident barn owl pair that have been at this site for 6 years. Hope they, too,have not been forced to move away!
Upon driving down the road from Hadham Hall, I checked a local dead tree where common buzzards regularly roost. A pair were to be seen, albeit somewhat distantly. Judging by size, the male at the top and the larger female further down on the right.
Lesser celandine were new for the year, flowering near the pools and old moat around the Tudor Hall. Also, flowering on the bank of the lagoon, coltsfoot, a typical late March plant. 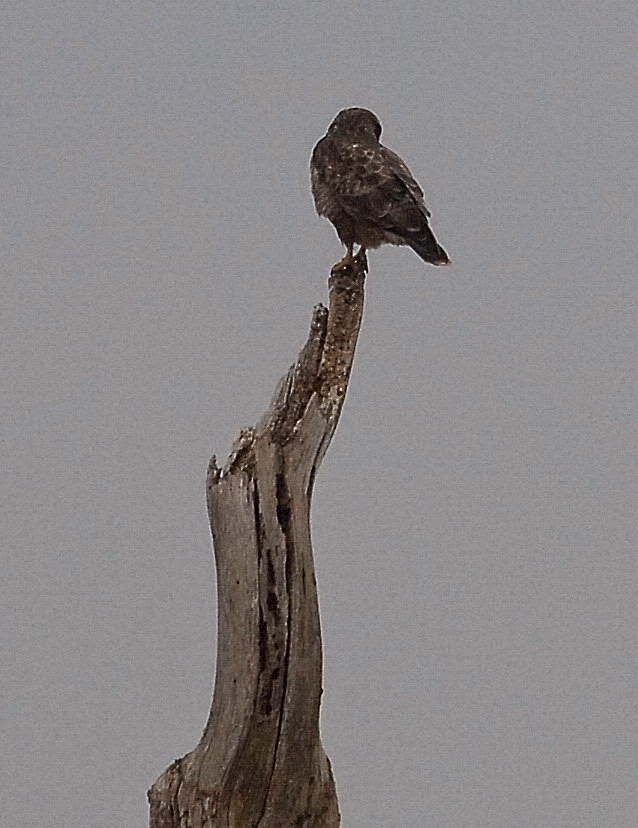 Posted by Jono Forgham at 21:20 No comments:

Leaving town at Tescos after a start up coffee, I headed back along lanes and footpaths to home. A chiffchaff called near East Wood (TL462215) whilst a second was heard and photographed at Bluebell Wood (TL 438219)
Great spotted woodpeckers were heard and seen as flyovers but not anything else of real note. Good numbers of skylarks, singing high over hay fields, 1 green woodpecker, 2 common buzzards. A check of Muggins Wood (TL442220,  a private wood which I have permission to enter) gave brief views of nuthatch, long tailed, great and blue tit whilst a tree creeper was heard only.
In all, 5 male yellowhammers were heard and seen, mostly along the hedgrow near to East Wood and the footpath leading from here to Cradle End. Always a good breeding bird to see in East Herts.
Plant wise, much to see, with common ground ivy, common dog violet, a single cowslip, dog mercury, marsh marigold and lesser celandine all being noted in flower. Jack in the hedge and lords and ladies were both found by the profusion of leaves, but yet to flower.
Goat willow was in full flower near East Wood, too.
After last night's heavy frost, it was no surprise when I failed to encounter any insects at all.

Double time today, with a morning session around Thorley Wash. A set of 3 treecreepers was a highlight in Wallbury swamp and on or adjacent to the reserve, whilst a calling reed bunting on teasels at the south end of the reserve was good to see and hear. Overhead, the resident male kestrel and numerous wood pigeons and a few stock doves.
Other birds of note were 2 great spotted woodpeckers, several wrens and a pair of bullfinches by the railway footbridge to the west of the reserve.
A grey heron was also observed, flying south but nothing of note on the scrape/pond area in the north west corner. Looks excellent for snipe, but these are masters of hiding, so may be present, just remain unseen.
At the weir near Spellbrook Locks, my first grey wagtail of the year and first spring calling chiffchaff of 2015. A pied wagtail called from nearby television aerials.


After popping home, I headed south, to Amwell some 8 miles away. A visit to the viewing point gave views of many gulls, mostly common and black headed, 4 goldeneye, tufted duck, gadwall, shoveler, teal and a pair of snipe. Further across Great Hardmead Lake several little egrets could be seen and a few male pochard. 3 common buzzards and a red kite overhead, but, all in all, rather quiet.
A few coots were being territorial and involved in showing off but a trip into the James Hide just gave more views of long tailed tits, reed buntings and a cetti's warbler calling. Brief glimpses of the bird were made, but too fast for a photo.
Altogether, a rather grey day so disappointing photos, but still good to be able to visit 2 reserves in one day.

Posted by Jono Forgham at 22:42 No comments:

New moth for the year. 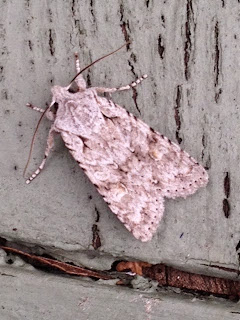 This morning just 3 moths in the garden trap: common Quaker, small quaker and this grey shoulder knot. Good moth to find at this time of year.
Posted by Jono Forgham at 12:47 No comments:

A very early 4.45a.m. start for a day birding in Norfolk. First stop was Lynford Arboretum near Mundford. The hawfinches were not to be found but siskins, chaffinches, nuthatches, brambling all kick started the day list. Poor light before 7 meant disappointing shots taken of the brambling. The temperature was pleasant and it was great just listening to the chorus of great tits, blue tits, goldcrests, treecreeper, nuthatch, blackbird, wren and song thrush all competing.


Brambling at the feeders 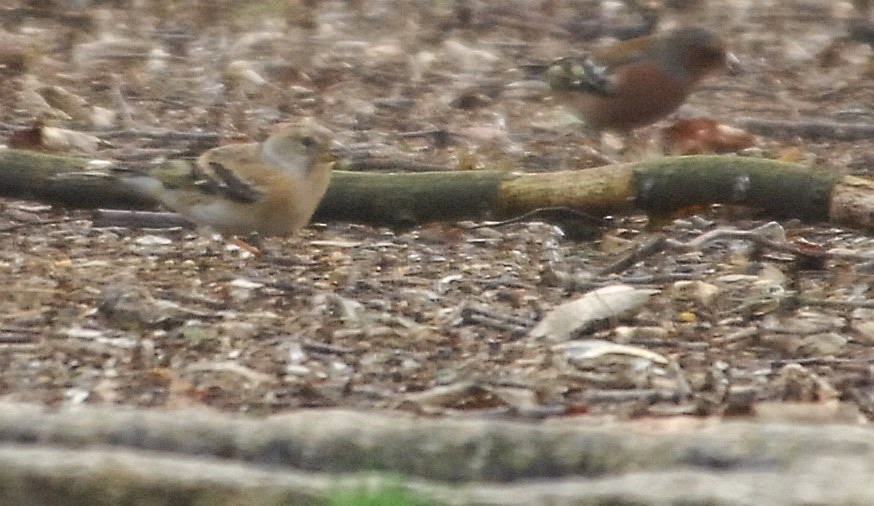 From here, I headed off to Cley East Bank and the beach where I came across a single water pipit commuting between Arnold's Marsh and the reserve. Bearded tits called and flocks of brent and greylag geese overhead. At one point, 4 marsh harriers were in the air, with one seeing off a carrion crow. Lapwings, dunlin, ringed plover and godwits made it on to the day list, before I headed off to Weybourne beach.

Here, I walked east, stopping to watch a few kittiwake fly past to a field that held a sizable flock of gulls. An inceland gull had been recently reported from this area and it looked like a job of going through several thousand gulls to find it. I joined a fellow birder, Nick but my concern was not warranted as the gull was sitting alone, on a ploughed field and was easy to spot. Both of then carried on towards Sheringham to find, firstly, a wheatear when we were joined by Lee. A scan of the ploughed field gave up 6 snow buntings and then, in the distance, 2 lapland buntings. The latter, too far way for a photo and barely visible with binoculars, definitely a scope job.


From here, Nick and I headed towards Kelling Heath but after a rather quiet half hour wander, with no dartford warblers or woodlark, we returned to the car. Goldcrests and tits in good numbers along with a green woodpecker. I returned to Cley carparkand the regular confiding black headed gull. The sea was exceptionally quiet so I then thought a quick view at ceratin vantage points along the A149. Stops at Holkham, Burnham Overy Staithe were made before I finished off at Titchwell. By now it was 4.30pm and the light was dreadful so no chance of anymore photos. As it happened, I didn't miss anything, with avocet, water rail, sanderling added to a reasonable daylist. Wonderful day out.