Set off early this morning to check for migrants and further signs of spring. New for year were comma and peacock butterflies, but nothing new on the bird department. Singing blackcap and several chiffchaff whilst overhead common buzzards and red kite, but nothing too noteworthy.
A check on the high ground of Ash Valley Golf Course for wheatear or ring ouzel was fruitless; both have been recorded here in the second half of April. Wheatear are annual and ring ouzel have put in two appearances since 2008, in 2010 (25th April) and 2012 (23rd April) so the search shall continue.

Set the portable 15 watt Heath type trap on footpaths over Ash Valley Golf Course on Monday night. A good haul of expected moths as the trap was placed under flowering sallows. 44 Common quaker along with a red green carpet which was a new moth for the year. In the haul of 66 moths was a small micro moth that, under the magnifier, looked to be Agonopterix ocellana. If so, a new moth for the parish.
I dropped it off at Graeme's for a 2nd opinion and he confirmed my suspicions. Moth species 708 for my parish records.
Surprisingly, took a 2nd one last night so they are now established in Little Hadham which is not unexpected. 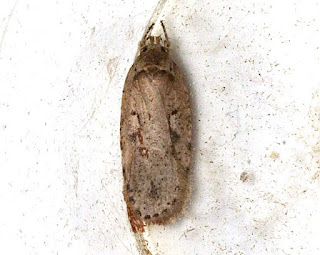 Sent from my iPhone
Posted by Jono Forgham at 07:55 No comments:


Trapping began on 08.i.18 after a brief holiday but it was on the 11th when I took the first moths of the year: pale brindled beauty and winter moth in Millennium Wood to the 15watt heath actinic, my regular portable trap. Another pale brindled beauty followed the next night, this time to the 125W skinner in the garden.
An Early moth on the 15th was the 3rd species for the year, taken by netting with a headtorch in Millennium Wood whilst a catch of many winter moth from wanders through other local sites. 16th -22nd remained mothless before a Spring usher on the 23rd in the garden.

Another evening with a headtorch and net in Millennium Wood on the 28th gave records of Dotted border, Chestnut and the first micro of the year, Tortricodes alternella whilst at home an Acleris schalleriana. Another mothless period ensued for 10 days until a Satellite and Dark chestnut were taken, along with another Chestnut, in Stocking Wood to the Heath trap. 7 blank days followed  before a March moth was in a haul of 29 moths from Millennium Wood, including 16 Dotted border. The following night, 18th Feb saw the trap running in Pigs Green where a Small brindled beauty made the year list, as did Common quaker and Agonopterix heracliana in a haul of 27 moths. Things were looking up as I took a good selection of already noted species from Alder Wood the following night.
The Beast from the East arrived and no more moths for February, with the 12 days being my longest mothless period since 2014.
The weather warmed up on the 4th March and again, I ran the trap in Millennium Wood: a shoulder stripe being NFY in a catch of 7 moths.

On the 7th an Oak Beauty in the garden was new before a trip to a new site for me. I had been granted permission, not only to run a trap in a private wood, but also to be able to drive through the farmyard and along the private lanes. Temperature looked good on the 11th as I set up the trap, returning around 11pm. Twin spotted quaker, Clouded drab, Dotted chestnut and Hebrew character were all new for the year, along with 8 previous species. The best night of the year, with 37 moths of 13 species. A great habitat, one I shall be trapping on many occasions this year.
Things trickled along, with an Engrailed netted at Ash Valley Golf Course on the 16th, the last macro of the quarter. On the 17th  a cold snap returned. Final moth for the first quarter was a Diurnea fagella from the garden trap on the 23rd. Last 8 days of the month were ones where a a few moths were taken each night, apart from last night when again, no moths were recorded.

Note: No heath trap before 04.iii.16
Clearly, we have had a hard winter and moth numbers have been well below expected numbers. Forecast for April looks better but it may well be some species that are usually taken in good numbers have been missed. Ones I took last year that I have yet to see  in the first quarter are:
Mottled umber, Acleris ferrugana, Acleris cristana, Emmelina monodactyla, Double striped pug, Early thorn, Early grey, Streamer, Brindled pug, Water carpet, Lunar marbled brown, Caloptilia semifascia, Eriocrania subpurperella, Purple thorn, V pug, Acleris literana

Posted by Jono Forgham at 16:40 No comments: