Early Friday morning and I was setting off for a weekend at Portland Bird Observatory, Dorset.

Basically, taking the M25 into account, a 3.5 hour journey, plus breakfast stop, so I was at Ferrybridge at the eastern end of The Fleet by 9a.m. Very windy and a few regular waders were about before I headed off to the Bird Obs. Once I had dumped my gear in the room, a brief sea watch from the patio before heading off to The Bill. Here, as expected, year listers in the shape of numerous guillemot, many razorbill, regular shag fly bys, and out to sea, a single great northern diver and a regular flow of manx shearwater.


A good start. From here, I checked local wood at Culverwell, but nothing noteworthy so off to The Hump and Suckthumb Quarry. Here, I scored with another year lister, spotted flycatcher. From here, I thought I would give the reported purple heron half an hour to show. It didn't and was seen leaving Lodmoor at 9pm that evening.

No further reports as far as I am aware. Another check en route of Ferrybridge before heading back to the obs, where I got a drive by view of a whinchat near Culverwell. Year lister again. The rest of the day was spent at The Bill and around the fields near the Obs as my feet are still recovering from Dengue Fever caught last month in Sri Lanka. Very swollen big toe made walking uncomfortable. I finished off with a sea watch from the patio, where more Manx and gannets were noted.
The following morning broke bright, warm and much calmer and a sea watch from The Bill at 5.45 added fulmar to the year list as well as more of what was seen yesterday. I then checked Culverwell again, coming across 2 spotted flycatchers and a magpie robbing a blackbird nest. From here, over to Top Fields and the west cliffs. Stonechats, meadow pipits and ravens showed well, as did more fulmars and several kittiwakes. 2 of the male stonechats were ringed but I couldn't get a clear enough photo to read these.


A bag of chips at The Bill and then back to the obs for a check to see if anything was new; there wasn't, so off to The Hump again and another Ferrybridge check. Here, a summer plumaged sanderling out paced some rapid ringed plovers whilst 2 turnstones decided it was quicker to fly the 50 metres covered by the sprinters. It wasn't! Little egret, gulls got on to the trip list but little else of note. I always think the area around Suckthumb Quarry, with its overgrown buddleia and red valerian looks great for warblers and flycatchers and I wasn't disappointed. 2 more spotted flycatchers and then a surprise. I looked to the side of a buddleia bush and there was another spotted flycatcher. On 2nd look I noted white wing patch and the 3 white lines emanating from a the patch; a female pied flycatcher, another year lister and a pleasing bird to find so late into May.


Tweets were sent off and then back to the obs. I slowed down as a bird was perched in exactly the same spot as yesterday's whinchat and, I thought, a photo opportunity. However, as I approached, it was clearly a whitethroat, so back to the patio for a sea watch before a doze as I planned to be out with the net for moths. I had tried this on the previous night and scored a disasterous blank apart from a good view of the resident little owl. However, once again, the night turned cold, breezy and bright, so after some food, a quick trip to the Pulpit pub over the road.


This morning, Sunday, I awake to fog and heavy rain, so a lie in. Eventually, I was up for coffee at 6.15 and very little on the sea apart from gannets and a couple of common scoter. 2 flocks of swift and a swallow came in off , but by 9.30 it looked like nothing was going to be new, so I headed home, with a brief check at Ferrybridge and Avon Country Park where I heard a few regular warblers, but nothing else. M3 was chockablock, so a 4 hour journey home!
Cracking weekend, always great to stay at Portland and with a holiday camping in Weymouth coming up at the end of June, I am sure I shall pop in on a few occasions. Thanks to warden Martin and assistant warden Glen for making it such an enjoyable weekend. Cheers.

77 species with 9 year listers. Considering very few migrants were arriving, a pleasing result.
Posted by Jono Forgham at 18:36 No comments:

Just finishing a few days of mothing before a couple of days staying at Portland Bird Obs. Yesterday, quiet time at the trap but knocked a few moths from Westland Green Common


These were just some, with small yellow underwing and more Glyphipterix simpliana netted and identified. At the garden trap last night, 2 new moths for the year in the shape of a small square spot and heart and dart. 2 moths that undoubtedly will feature regularly over the ensuing weeks.

This afternoon I took myself off to the local golf course (Open champion 2011!!) and netted any moths from the rough. I am most familiar with this golf course habitat, as either my drive or second shot will successfully find it! Today, flushed 2 cinnabar, 2 small yellow underwings, Mother Shipton, latticed heath, Crambus lathoniellus and a micro that, if my identification skills are close, will be a rare for Herts! Presently being dried for dissection, but hoping for a Dichorampha sp! All under recorded in Herts.

Posted by Jono Forgham at 21:21 No comments: 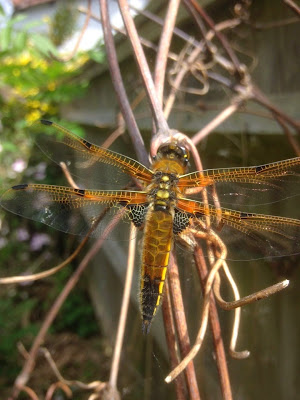 This superb dragonfly, a 4 spot chaser, was in the Little Hadham garden that I work in Tuesdays. Only had phone camera so could be better but still pleasing to see. Only seen this species on 3 previous occasions within the parish.
Posted by Jono Forgham at 20:32 No comments:

Bank Holiday round up

Not the warmest evenings for moth trapping, so few to report. A buff ermine, common pug and treble lines were all new for the year in the trap over the last 2 nights but not much else to report.


A couple of hours in Millennium Wood yesterday came up with a few moths, particularly Crambus lathoniellus which was new for the year as well as several Celypha lacunana, whilst another trip to Westland Green realised 8 Celypha lacunana, 2 Crambus lathoniellus, 12 Glyphipterix simpliana and a pug sp, probably mottled pug.
Other insects a new hoverfly, namely Sphaerophoria scripta, shown here. A diagnostic feature of this creature is that the abdomen is longer than the wings when folded, as illustrated in the photo.

Another new insect was a hairy shieldbug. This means I am now just a few insects away from registering 100 species, not including butterflies, moths, dragon and damselflies. In all, I have recorded in excess of 800 different species of creatures within the parish and, with some searching and learning, should make this over 1000 in the next few years.

Posted by Jono Forgham at 20:38 No comments:

After a midday rain shower the weather perked up and, although wet underfoot, warm air and a little sun encouraged me to check a local wood and also encouraged insects to appear on top of leaves.
The only moth I encountered was the common micro: Notocelia cynosbatella, whilst also discovering several new insects for the parish records, particularly the smart hoverfly Leucozana Lucorum and a Red headed cardinal beetle (Pyrochroa serraticornis) as well as the common Cantharsis nigrans.

A load of small tortosieshell caterpillars were found on nettles and further along the track a web of micro moth larvae, an early instar on an, as yet, unidentified foodplant. Photos taken to be forwarded to those more knowledgeable about such things, i.e.county recorder, Colin Plant.
A tiny 14 spot ladybird also discovered, sheltering within the stem of a nettle whilst several flowering plants were noted. These included yellow iris, bittersweet and greater stitchwort.
From here, I headed to Hadham Hall to check on the owls. None noted at their respective tree holes. Drake Mackerel Mayfly were on the wing in their hundreds, bouncing up and down in their regular flight. 2 mute swans, grey heron and a female mallard were the only birds at the lagoon, with skylarks, linnets and yellowhammers all in fine voice. Few more weeks and some sunshine and their will be dragonflies and damselflies to record here.
Plant wise, hop trefoil was abundant and a small stand of cut leaved crane's bill was good to find.
Moth wise last night, a few regulars, bee moths, scorched carpet, flame shoulder etc but also clouded border and buttoned snout were new for the year, the latter being found on the pub wall. In all 17 moths of 10 species, with brimstone moth being the commonest with 3 specimens. A new micro was also in the trap, a brown house moth, Hofmannophila pseudospretella and to finish with, always a splendid insect, the 1st cockchafer of the year.
Posted by Jono Forgham at 22:42 1 comment: