So moving on to godwits. 2 species to deal with here which superficially look alike but there are enough differences to sort them out pretty rapidly.

The two species are Black tailed godwit and Bar tailed godwit. The names describe the tails perfectly but occasionally these may not be visible.

A long legged, long beaked bird found in large flocks, feeding on the mud and also capable of wading into deeper water to the extent that they can actually be seen swimming. As with dunlin there are several sub species but we won't dwell on those complexities here. Most of the time they will be seen in non breeding plumage, a basically grey/faun colour showing a long bill, pink at the base and darker towards the tip 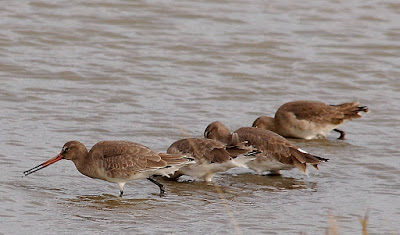 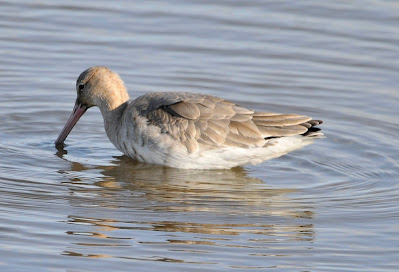 2 photos here of none breeding plumage. Note the legs are dark and also the colouration of the bill. In the top photo the bill is wet but the dark tip can still be seen. The black tail feathers can be seen in both photos

The 2nd photo is full none breeding plumage. The flanks are plain whereas in the first there is a hint of edging showing it is or has moulted. 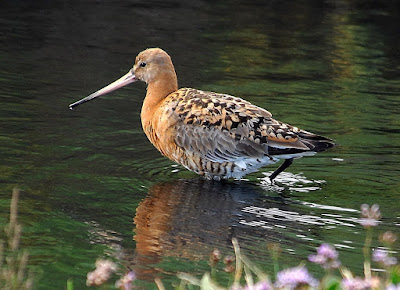 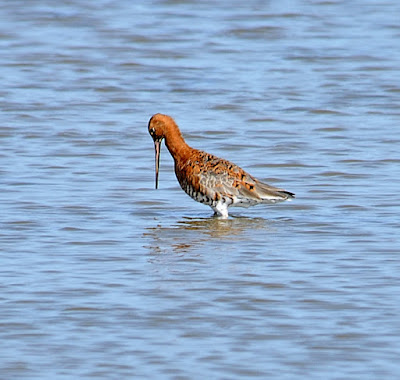 Both these photos show Black tailed godwit almost in full breeding plumage. In the first example note the flanks have already moulted and regrown back the grey/brown colour whereas in the 2nd example the orange and black feathers are more prominent. In both, straight bill and in the first photo a glimpse of the dark leg. Tail shows a black band as always. Also, note the barred markings on the belly. 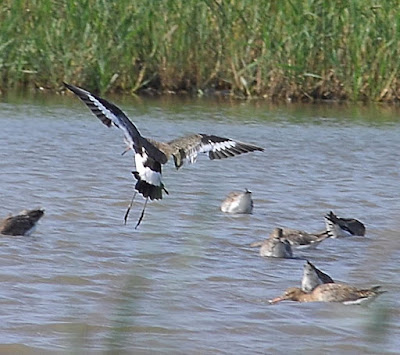 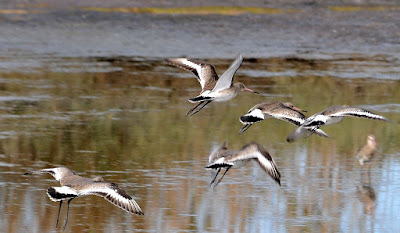 In flight, identification becomes easy, even with the briefest of views. As well as showing the wide black terminal band on the tail, ONLY the Black tailed godwit has white wingbars as clearly seen in these two images, top one from Norfolk, second one from Aviero, Portugal. Also in flight the feet protrude further than the tail feathers, but good views needed to pick that feature out.

Again, a long legged and long billed wading bird that visits our shores either side of migration. However, the bird appears dumpier in the field and its legs are noticeably shorter than black tailed. The bill has a perceptible upturn to it. Very obvious when you encounter a mixed flock. 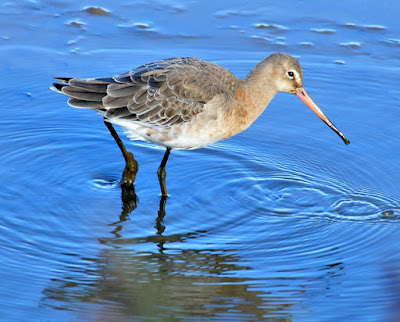 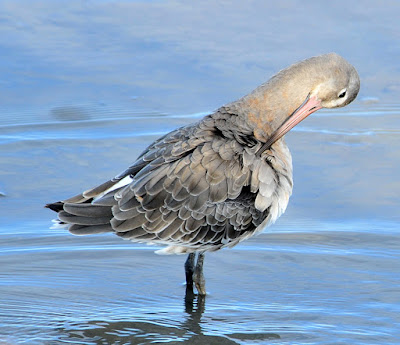 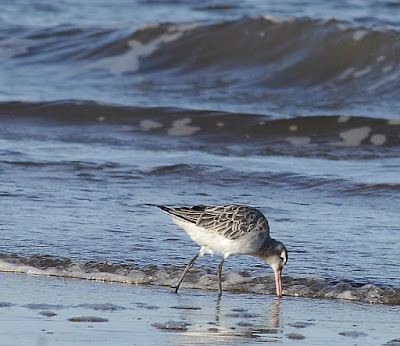 Bar tailed godwit in winter plumage. Dark legs again and the colouration on the bill is similar to Black tailed but the upturn of this bill can just be seen in this shot. Notice also, in none breeding plumage that the flank feathers are not plain as in the black tailed godwit. The barring on tail feathers is frequently not visible as is the case here. Note all three photos show the white eye stripe, even at distance in the 3rd photo from Titchwell beach. No white eye stripe on black tailed godwits 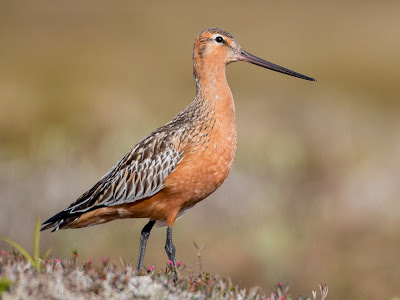 In breeding plumage there is no barring on the belly as in Black tailed. There is considerably less orange feathering on the wings whilst the dark legs and upturned bill remain the same. Note also, in both plumages there is a white eye stripe on bar tailed which is not found on black tailed. 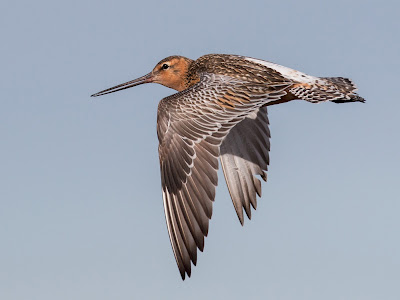 In flight, no white wing bar and the barred tail is evident along with a white triangular rump. Note that only the toes protrude beyond the tail feathers whereas in the black tailed the protrusion also includes the whole feet.

The Bar tailed photos in flight and summer plumage have been googled as I didn't have any that showed the pointers clearly enough. The rest are are all mine.

To sum up: Bar tailed godwit: more mottled appearance in winter plumage, barring on tail, upturned bill and white rump with no wingbars in flight. 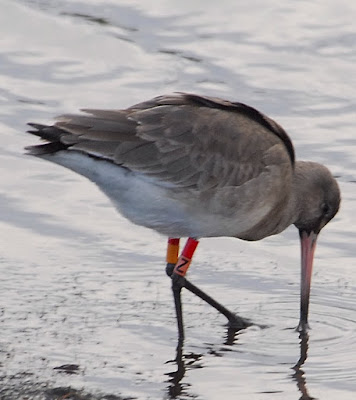 This bird, which I'm sure you can work out for yourself was at Titchwell in 2015. I managed to get the photo showing the colour rings and the code was RORZ (Red Orange Red Z.) I sent the photo off to find out more. This female was ringed as a nestling four years previously. The data showed she arrived in The Wash in 2015, 2014, 2013 and 2012 at almost the same date each year. Only a remarkable 3 day change over the 4 years.

Godwits pair for life but amazingly the females head to western Europe from Greenland and Iceland whilst the males prefer the sunnier climes of West Africa such as The Gambia. Even more incredible is that the pair meet up back at the breeding ground within 72 hours. If a bird has not found its partner in those 72 hours he or she will pair with another singleton. Just crazy really that they set off from different time zones and latitudes and arrive back in the same field at the same time.

A good task. Use Google images and put in Bar tailed godwit winter plumage and see if you can spot any that are labelled bar tailed that are black tailed. I noted a few.