Having put a post on Stortford Nature Facebook about identifying corvids and saying if anyone had other identification issues I'd be happy to advise, I got a request for gulls and waders! Wow, that is an easy intro. Here goes. Thanks Dave Bromage!

First rule of watching waders is to know the common species. When I was 7-11 or so I used to bird watch waders around The Wirral and was always told, "Know your dunlin." The most common species so first tip is to spend time watching these. Get a feel for their shape, their movement when feeding, how they run and move, how they flock together. Once familiar with them it becomes easier to spot a bird on the mud that appears to be a different bird. It may look plumper, longer bill, more of a white stripe over the eye. Then start to note the colour of beak and legs. Warning, they may be covered in mud so not always guaranteed. A redshank shows orange legs but these can appear mud coloured due to the fact they're muddy!

So; lets start with Dunlin. The most common wader, a small rounded and plump bird found on mud from late August through to April but in high numbers during migration season (March - early May and then August- early October.) Consequently, it shows several plumages as shown below. Mainly it will be a grey/brown bird whilst breeding plumage shows a golden back with an obvious black belly. 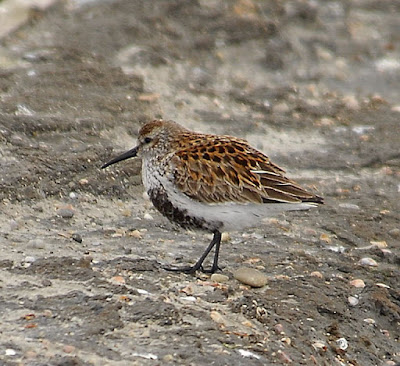 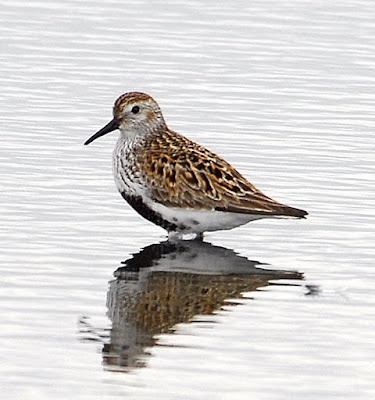 In breeding plumage the dunlin is unmistakeable. Note the slightly decurved bill and the black legs on these two individuals. One from Norfolk, one from Aviero in mid Portugal. Both on migration north to their breeding grounds. Also, note the white eye stripe, (supercilium) as this helps with winter plumage. 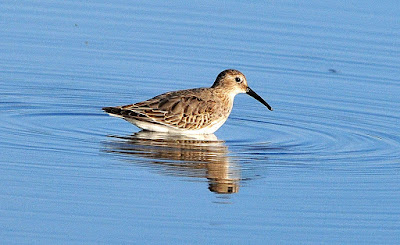 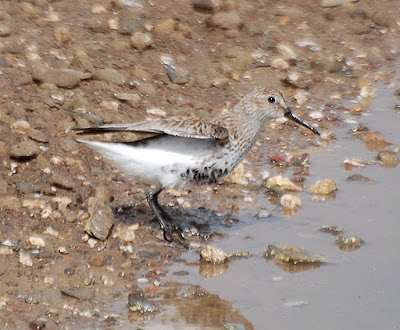 Two Dunlin in changing plumage. Note the dark belly just coming on the second bird whilst the golden wing and mantle feathers are showing through on the first bird. In both, the decurved black bill and black legs remain the same. Photos from Norfolk (first) and Tavira in The Algarve (2nd)

When dunlin migrate through the UK and some overwinter at places like North Norfolk they become a much greyer in plumage. This is their none breeding plumage that will be apparent from September through until March. It can still vary. There are 4 sub species of dunlin all showing their own diagnostic characteristics but here is not the place to go into the complexities of all of that. 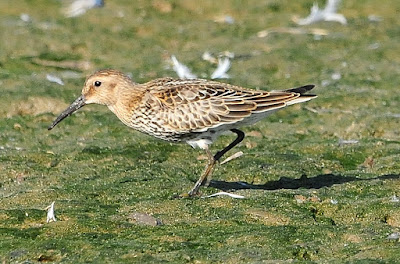 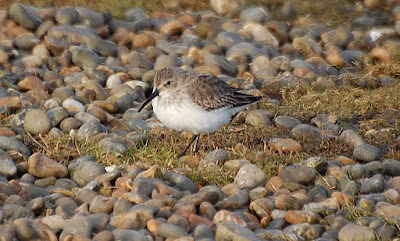 The two photos above show the progression to winter plumage as shown in the final snap. Note also that dunlin invariably feed in a flock. They tend to walk in the same direction, occasionally running. However, as always, the slightly decurved black bill and black legs, along with the rounded dumpy shape remain the same. Also, note that the white supercilium (eye stripe) remains and joins just at the base of the upper mandible. 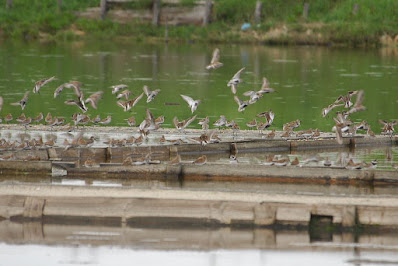 Dunlin in flight. Very fast flying so tough to note too much detail. White underwings, darker on top, black belly when in breeding plumage. Note the black "spine" to the plumage that comes to a point at the end of the tail. Often too fast to note this but can be picked up in photos. 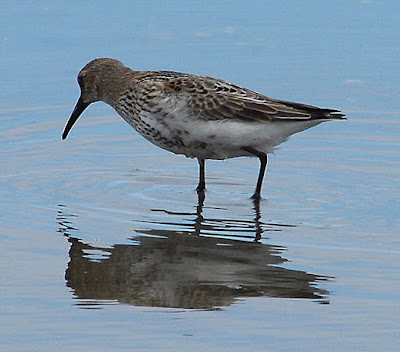 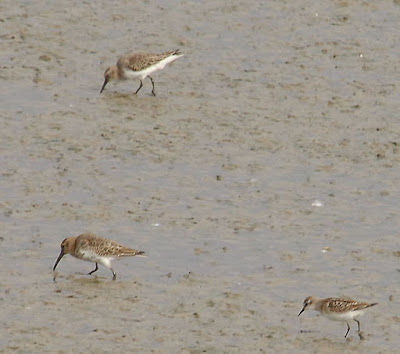 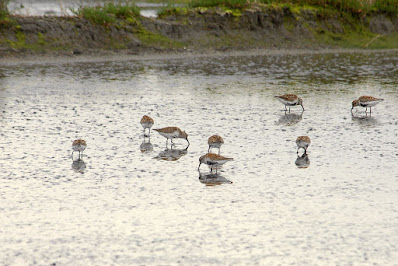 Top photo of these three, standard dunlin in moult. However, second photo serves as a good example of seeing other birds that to begin with look similar. Note the bird on the right. Smaller, straighter bill which is clearly shorter and a more prominent white eyebrow, mainly behind the eye rather than meeting at the base of the bill. Time to look more closely as this is not a dunlin. A Little stint which I shall cover in another episode. Final photo, Aviero, south of Porto in Portugal, just shows a group of mid breeding plumage Dunlin doing what they do. 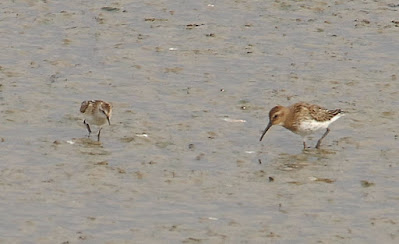 Final photo. Differences in size and colouration around the face raise alarm bells. Dunlin right and a Little stint left.

So, highly recommended. Sit a while overlooking a scrape where Dunlin are present. Watch them behave and wander. Note their takeoff and landing. Check the beak and legs and then begin to get into the finer details of their plumage. Not easy but it does become less confusing with time. I've only been doing wader watching for 55 years and still say "What's that, 3rd bird from the left of the greylag goose?" and it will be a long billed dunlin.