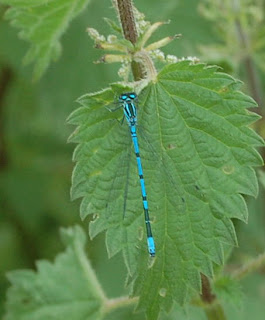 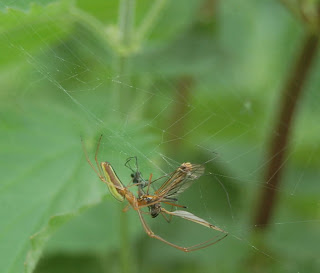 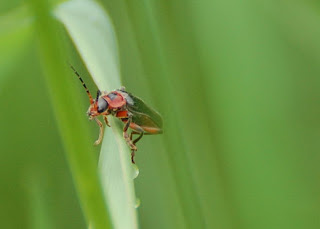 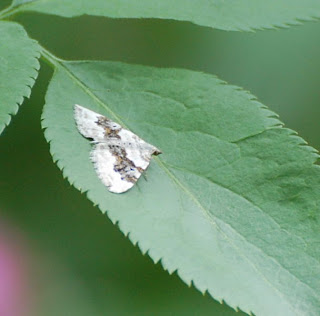 After several days of continuous rain, the weather eventually changed and became a tad muggy. Good weather for emerging insects I thought and so it was.

31 species of bird were registered, with a new bird for the list being a group of sand martins, feeding over Chapel Lane in the evening. Also of note, a low flying cormorant headed south at 12.30 p.m. whilst a solitary lapwing headed north, observed from the bench adjacent to Bush Wood.Both good birds to see locally. The rest was the usual suspects, including warblers I the shape of common whitethroat, blackcap and chiffchaff. Woodpeckers are obviously breeding and the young great spotted could be heard from tree holes.

1 orange tip, 12 small whites and 7 large white butterflies were counted but the highlight was a scorpion fly (panorpa germanica) photographed in Bush Woods. There had obviously been an emergence of silver ground carpet moths as there were numbers in excess of 15, resting on hazel and elder leaves. Regular sightings of the beetle canharbis rustica were made. A small, flying beetle with red wings and black body. Easy to find on plants, especially the parsley family. New plants came in the shape of wood avens (geum urbanium) perennial sows ear thistle (sonchus arvensis) and herb robert (geranium robertanium) An azure damselfly was observed feeding along the River Ash, as was a 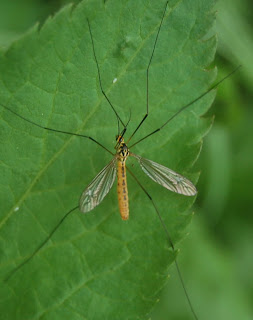 spotted cranefly and Tetragnatha extensa spider. See attached photographs for these. A good 2 hour walk with an enjoyable beer at Bush Wood bench. Photographs are fairly explanatory, nothing rare, just firsts for the year. The colours on the spotted cranefly are particularly bright, a newly emerged specimen probably. The scorpion fly despite its name is harmless, the male having a mock sting on the ed of the abdomen rather like a scorpion. This photo of the spotted winged insect is a female. Note the large proboscis on this creature; click on photos to enlarge 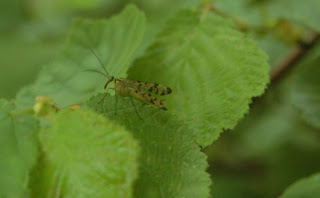 . The Tetragnatha extensa is making a tasty meal of what looks like a cranefly.
Posted by Jono Forgham at 14:42