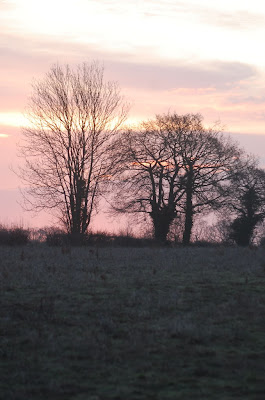 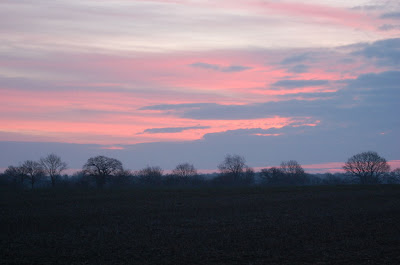 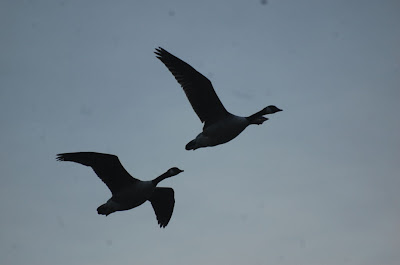 14 brave souls met at the village car park at 5.45am (on the morning the clocks went forward!) for a 6 mile wander along local footpaths to listen and hopefully observe the birds. The route taken was through the village to Ford Hill whereupon we took the ridge footpath to Winding Hill, Much Hadham before crossing the River Ash and heading to Ash Valley G.C. for a morning coffee. Following the break, we headed uphill to Westland Green, around the lanes and then descended via the footpath that runs adjacent to Queer Wood back to the village hall. In all, just under 4 hours. 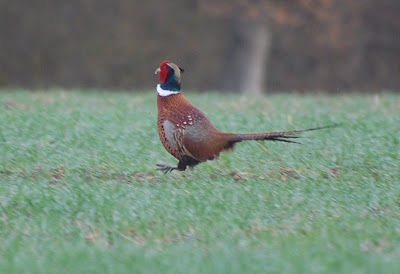 Not too many special or unusual birds were recorded, but a calling chiffchaff at Westland Green, plus another at the village hall were 1st recordings for the year. Robins, song thrushes and blackbirds sang in the village and on the footpaths yellowhammers and chaffinches were heard as well as soaring skylarks. A pair of canada geese gave a good fly past, followed by a lower group of 5 (shown here.) 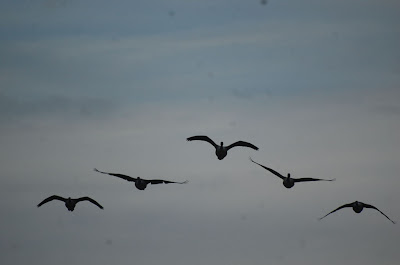 A nuthatch called as we were near the golf course and a pheasant ran for cover (shown here.) Faith enjoyed the whole trip, being the youngest to join in an early morning wander and became the official carrier of the binoculars. Other birds seen/heard were wren, greenfinch, great spotted woodpecker, jackdaws, carrion crows, rooks, wood pigeons, fieldfares, collared doves, goldfinch, solitary herring gull, long tailed tit, blue tit, great tit, pied wagtail and green woodpeckers. A common buzzard was heard "mewing" but not seen. Unfortunately no owls or other birds of prey were encountered.
A wonderful start to the day, in great company. I now am planning the 2nd dawn chorus wander for April 18th, meeting at the village hall at 5.00a.m. and then a walk around Bury Green, Cradle End and Ford Hill. By this time there should be more to hear and see. I look forward to sharing the morning with as many as can make it. Other photos show the glorious sunrise we were treated to along the ridge.
Posted by Jono Forgham at 17:47