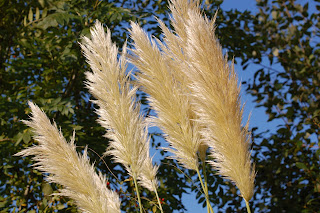 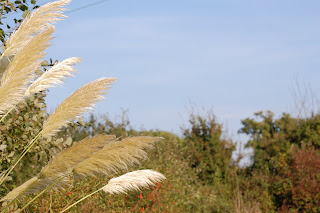 An afternoon, in glorious sunshine, was spent working on the allotment. General harvesting and tidying was the order of the day. However, did take breaks to watch what was passing through, ending with an impressive list. Highlights were a calling tawny owl at 2.30p.m., a common buzzard, a chiffchaff and 3 skylarks. The buzzard had clearly lost its patience with a carrion crow that had been mobbing it; last seen with the buzzard chasing the smaller crow and frequently trying to attack it with talons to the fore. In all 20 species were recorded. For such a small area, this was most pleasing to record.
2 small tortoiseshell butterflies and a large white were also recorded. Photos here show the pampas grass that grows nearby looking its best in the sunshine.
Posted by Jono Forgham at 17:47