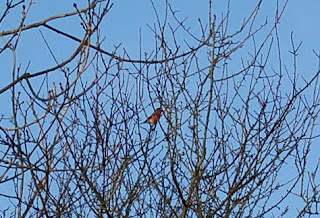 This morning I ventured up Chapel Lane and on to the Queer Wood route. A total of 29 species being recorded, the highlight, 3 bullfinches. This trio consisted of 2 immaculately plumaged males and the dowdier female. A distant shot of 1 of the males is shown here.
Greenfinches wheezed their call along Chapel Lane and a single kestrel flew from the large oak. A pair of these were later observed over the golf course to the south of the Lane. On to the footpath, past the stables and towards Westland Green. Here the bullfinches were both heard and seen. 3 skylarks and a single yellowhammer (male) were also recorded near the golf course. A party of long tailed tits kept me company along the beech hedge before Queer Wood, where several female pheasants were flushed. Green woodpeckers (2) were heard "yaffling" and a little later, on the footpath down to Pathway cottages a single great spotted woodpecker was heard drumming. Redwings were in parties of 20+ heading north and several tens were found in a field near the road. Having stated that the fieldfares seem to have departed, I heard their familiar "chack chack" call and came across a field holding in excess of 100! A little early with my departing comment, I fear.
Posted by Jono Forgham at 10:28