Following last week's Easterlies, birding looked good for Monday so I was off to Norfolk at 5.30am for a day along the coast, mainly around Wells Next the Sea but with a chance to pop along to Cley also.

I arrived at Garden Drove, east of Wells and walked to the coastal footpath and headed west. Here, there had been sightings of a rare Brown shrike, just the 2nd ever record for Norfolk. As I wandered along the track, many of the trees were dripping with birds including an elusive Yellow browed warbler and several brambling. These were mobile and high in the oaks and with poor light, not worth getting photos of. I arrived at the brown shrike site where there were 10 - 15 birders. The shrike had been seen feeding on the nearby marsh before returning to its favoured hawthorn. In the distance, 3 wheatear sat atop a hedge. After half an hour of nothing, I decided to cut my losses and move on. I stopped by a small hollow surrounded by hawthorns and brambles. Perfect spot for a shrike as it uses thorns to impale its prey such as lizards, occasional small birds and beetles. I spent a good 15 minutes checking but just a redstart, Pied flyctacher and plenty of reed buntings along with a wren and a robin.

I headed back to the car thinking that if I had time, I would return late in the afternoon for another check. A meadow pipit posed nicely as I re checked the trees along Garden Drove, much as before.

Next stop was Wells Woods near the Beach Road carpark. Usually a good site in mid September and I was not disappointed. Plenty of birders about, many showing no awareness of social distancing at all. I wasn't comfortable and moved off. Red kites over Holkham Marsh, curlews, cetti's warbler, blackcap all made the day list before I came across a group studying a line of birch trees. Here, 2 more Yellow browed warblers but, keeping my distance meant I was too far for any photos. Good views through the binoculars. A huge skein of Pink footed geese came in, all very noisy, having flown from Siberia and the Arctic Circle. In another birch, a pair of willow warblers and a chiffchaff. 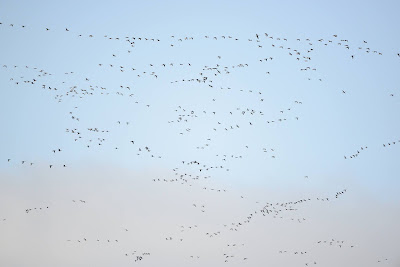 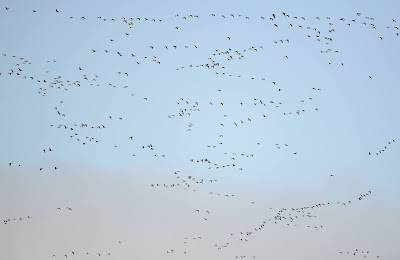 I turned to wander back to the car park when I encountered another group, again, all close together. I stood back just as a Red breasted flycatcher popped up on to a rosehip laden branch. Much too fast for the camera before it disappeared into a leafy silver birch. Most of the birders then circled the tree and cameras shot endless photos. This tiny bird, a first year bird will have fledged somewhere in North Eastern Europe or Siberia and has either been blown off course or, more likely headed west rather than instead of South East to Western Asia. They usually stay for a few days before continuing their journey but it is not known if they carry on in the wrong direction and perish or recalculate and make the journey back to where they should have been. Alternatively, they stay around and usually perish through the insectless winter. This splendid bird turns up in very small numbers in North Norfolk most autumns. Another Pied flyctacher was noted and yet another Yellow browed warbler, another bird from Siberia and found annually in Wells Woods and Holkham pines, often associating with the smaller goldcrests.

I returned to the car with just a few minutes remaining on my ticket and headed off to check the East Bank at Cley. Upon arrival, I checked Snipe's Marsh, just a teal so off the the East Bank. Redshank, meadow pipits and curlew on The Serpentine along with mallards and gadwall, little egrets and black tailed godwits mixing with curlew. A distant Marsh harrier rose from the reed bed as I arrived at the Richie Richardson hide, an open construction so permissive entrance. From here: avocet, ruff, grey plover, redshank, solitary greenshank, numerous cormorant and shelduck. In the far distance, a large female peregrine sat upon a fence, a photo impossible due to so much heat haze, but a great sight, nevertheless. A quick check on the sea, a few far off gannets and a variety of gulls only, so I returned to the car in 20+C temps.

By now it was mid afternoon so I thought a return to Garden Drove and a few hours searching for the elusive shrike. Once parked by the pig farm I checked the trees as I headed back to the coastal path. More of the same and the light was still bright and harsh so I thought I would try upon my return. I arrived to find a group of birders next to the hollow I had checked in the morning. The shrike had been seen in another hawthorn hedge at the back of the site. I raised my binoculars and there it was, in the bush, not great for photography. This is another bird from Siberia and should have migrated to East Asia, perhaps Thailand or Sri Lanka. This is known as reverse migration where a bird basically goes 180 degrees in the wrong direction. Again, the outcome for the bird is not known. This was, as most incorrect migrants are, a first year bird showing barring on the breast and the beginnings of the black mask that most shrike species show. This was a new UK bird for me, having seen plenty in Sri Lanka over the years. It moved several times but never offered itself for a good photo, a few of my efforts here. 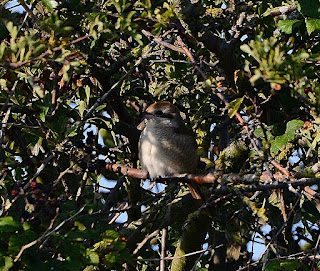 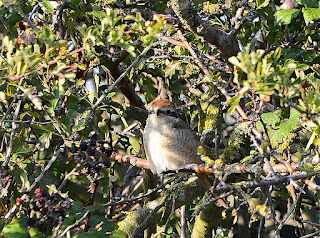 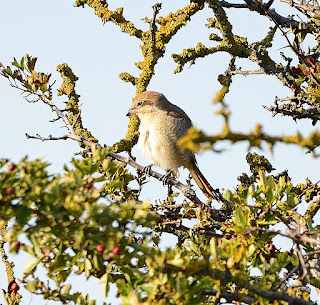 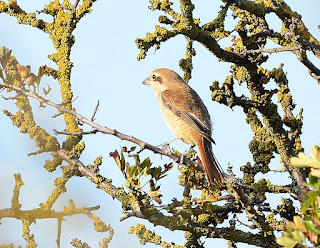 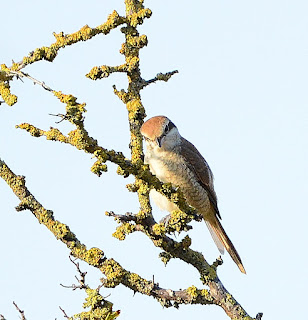 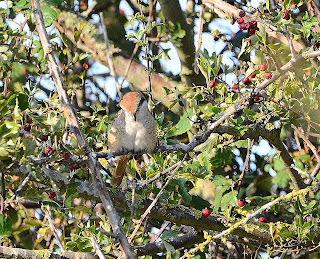 I left and I as I wandered to the car there were still plenty of birders heading along the path to see it, relieved to hear that it was still present. Along Garden Drove Long tailed tits and chaffinches lent themselves nicely to some photos in the orange light of early dusk. A large flock of Golden plovers came in to roost on the marsh before I was back at the car and ready to head home. Been a long but fruitful day. A small copper butterfly alighted just as I got back to the car, a pleasing conclusion to the day!

Species list, which is certainly quality over quantity for a Norfolk Day and with most of the hides on the very busy reserves closed, I will have missed out on probably 30 - 40 definite species. Pleasing list, though.