Friday morning and a late start for me due to a late night previously. Therefore, I was on the road by 8.30, heading to Burnham Overy Staithe, between Hunstanton and Cromer. The target here was the rare Spectacled Warbler, only the 8th record for UK. It had been reported from low sueda vegetation near the dunes at the end of the sea wall and footpath from B.O.S., about a mile from the village centre and sailing club.
As I wandered along the path, constantly being overtaken by those in a hurry to see the rare bird, I recorded, spoonbill, little tern, common tern, oystercatcher and several other waders. Cormorants and a solitary little egret flew overhead. At the "twitch" there were about 50 or so, strung out in a long line. The bird was seen frequently, calling and carrying nest building material to a low bush at the back of the patch it clearly favoured. This was my first UK sighting of a spectacled warbler, having seen and heard plenty around The Camargue. Basically a small whitethroat with a dark patch on the lores and a much shorter and scratchy call. Getting photos was not easy as it only stayed still for a second or two, before flitting elsewhere. Clearly, he was not going to find a mate, but there was the chance he would be present at the weekend when the majority of birders would be able to see him. 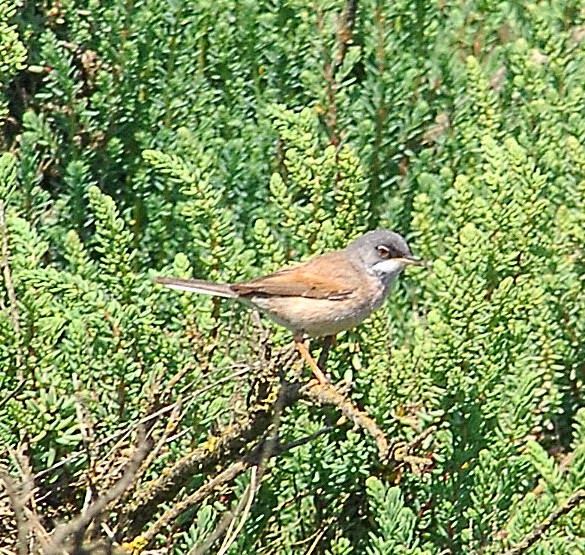 As with all twitches, there are a few folk whose enthusiasm gets the better of them and at one point a meadow pipit popped on to a nearby branch. to the cacophony of 30 cameras firing off 5 shots per second. However, the humour was good and the bird's territory respected.
As I wandered back, I tried for little and common tern photos, but the heat was creating a haze that hindered sharp shots, as noted in the ones above.


Also, as I wandered back, a skylark decided to dust bath just infront of me. 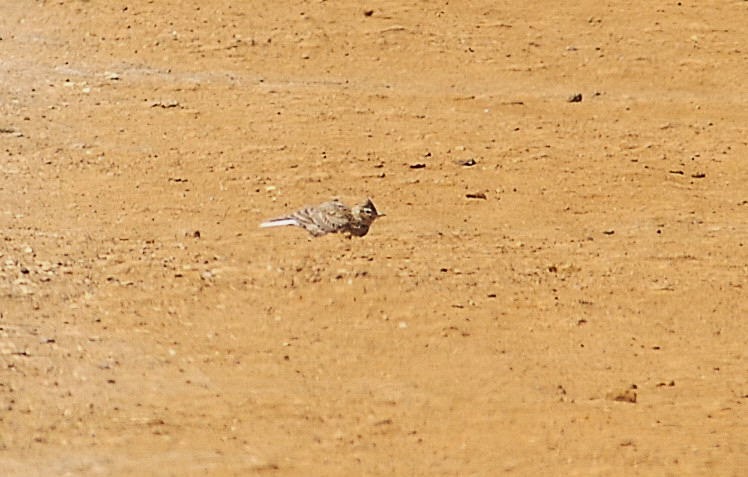 After this, and bumping into Colin, a birder I know, I headed off to Titchwell, a few miles to the west. Here, all was fairly quiet bird wise but very busy human wise. Not too much about apart from several red crested pochards on Thornham Pool, 2 greenshanks at the back of Freshmarsh as well as fly over little gull and more little terns.

By now it was mid afternoon and I decided to head east, towards Lowestoft, so I stopped for a coffee at Cley NWT base. As I sat there watching the very quiet reserve, news broke of a local red backed shrike at Walsey Hills. Initial comments were that it had flown so I headed off to Gramborough Hill as there is  likely habitat there, to be met by several birders who had seen it well on the fence post, before it headed south over the fields. Out with the scope and there, distantly on a small bush was a female red backed shrike. It then headed east along Meadow Lane. I thought it might be worth popping down to Kelling Water Meadow, the other end of Meadow Lane to get a possible photo, but I was concerned about time, as I needed to be set up at Lowestoft for a 7.30pm show on the Birds of Sri Lanka.
I stopped off at West Runton clifftop for a few minute sea watch, but only new bird was sand martin. Then, off to Lowestoft via Cromer and Gt. Yarmouth.
I managed to get there in time to enjoy some fish and chips before the talk to a good audience, eventually arriving home at 12.45a.m. Indeed, a long day.
The only other noteworthy sighting was of a quail that ran out in front of the car as I drove towards South Creake, not far from Sculthorpe Reserve.
Bird species, red ones are year listers:
cormorant, little egret, grey heron, spoonbill, mute swan, greylag goose, canada goose, shelduck, mallard, gadwall, shoveler, teal, red crested pochard, tutfed duck, red kite, marsh harrier, common buzzard, kestrel, hobby, red legged partridge, quail, pheasant, moorhen, coot, oystercatcher, avocet, ringed plover, lapwing, turnstone, dunlin, redshank, greenshank, black tailed godwit, bar tailed godwit, black headed gull, mediterranean gull, herring gull, little gull, little tern, sandwich tern, common tern, wood pigeon, collared dove, swift, green woodpecker, skylark, sand martin, swallow, house martin, meadow pipit, (50 sp) pied wagtail, wren, dunnock, robin, blackbird, blackcap, whitethroat, spectacled warbler, sedge warbler, cetti's warbler, reed warbler, willow warbler, chiffchaff, great tit, blue tit, long tailed tit, red backed shrike, magpie, jay, jackdaw, carrion crow, starling, house sparrow, chaffinch, goldfinch, greenfinch, reed bunting, yellowhammer. In total 78 species. Not too bad for a June day
Posted by Jono Forgham at 19:04