A few days in The Algarve with a specific trip north to the Baixo Alentejo region, based around the pleasant town of Castro Verde.
Arriving after an early morning flight (6.35 from Stansted) meant I was at Faro station by 10.30 where grey plover, little egret and a black stork were noted. Yellow legged gulls were everywhere, as were white storks, common and pallid swifts. I arrived in Tavira by noon and out on to the salt pans. I have been here before but earlier in the year. Many migrants had moved on so not as much as previous trips. Waders, however were in good number, with dunlin, curlew sandpiper and sanderling in many of the low water salt pans.


Other good birds were greenshank, sardinian warbler, hoopoe, beeater, caspian, sandwich and little tern and lesser whitethroat. The latter is a rare migrant to The Algarve and a submission record has been made. This, if accepted, would only be the 5th record for the region. However, single person observation probably means it will not go on record.
Several yellow wagtail (ssp iberiae) were about, a few flamingoes and plenty of white storks and avocets added colour and interest. The most common bird however was the zitting cisticola, or in old money, the fan tailed warbler.

After a good wander, back to Tavira for an evening meal with friends David and Hilary with whom I was staying. A fado concert was also taken in along with a few drinks in the Pink Flamingo. 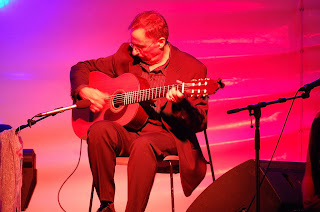 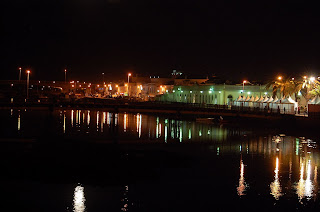 The following morning, a train to Lagos, some 2.5 hours away. Some good bird watching from the train before a short walk to my usual pension in Lagos old town. Once the luggage was left I was out in bright but windy conditions for a walk along the beach towards the Rio Alvor and Meia Praia. Loads of clouded yellow butterflies and a solitary common wheatear in the dunes, goldfinches, serins and greenfinches but nothing apart for a single cormorant on the water. However, disaster struck: a gust of wind took my treasured straw hat for a 30 metre roll and into the sea. By the time I got to the water's edge it was already too far out. 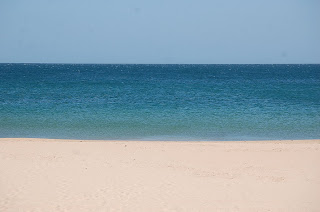 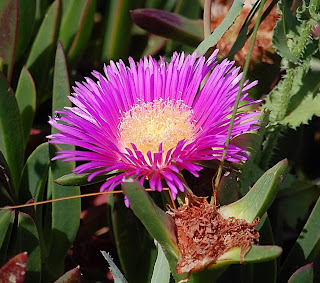 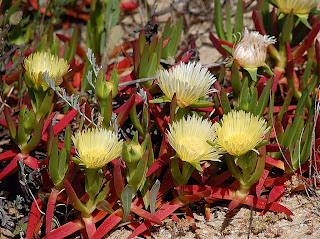 The plant life in April is magnificent, with these wonderful blooms a common occurrence in the dunes.
That evening, I purchased a cap as the wind was forecast to be gusty for the Sunday. I had planned a trip to Sagres but I knew that if it was windy in Lagos it would be very windy there, so I took the train to Mexilohiera Grande and wandered in a leisurely fashion the 15 miles back to base. Plenty of everyday Algarve birds were noted, including serins, azure winged magpies, red rumped swallows, corn buntings and another woodchat shrike. In the distance, high over a golf course a single booted eagle rode the thermals, identified by the white markings on the leading edge of the wings that are often referred to as "landing lights." I had no idea where I was, just wandering roughly in a westerly direction, so much amusement when I stopped at a village bar to ask where I was.

That evening a fine meal in a local bar before an early night as Monday was the big day, a dawn until dusk trip some 85 miles north east to the Baixo Alentejo with undoubtedly the best guide in The Algarve, Simon Wates his very useful website.
I was picked up at 6.30 for the drive to Castro Verde where we met fellow birders Alan and Diana. Talking with Simon was easy as it was with our new colleagues, a lovely and enthusiastic pair.
After a coffee we headed off to track down a local rufous bush robin but the temperature was struggling to get over 10C so it was neither singing nor showing. Corn buntings and nightingales were in fine voice with beeaters and storks overhead. A woodchat shrike posed on a fence post, but no bush robin. We moved on to pastures new where we quickly connected with short toed lark, black eared wheatear, great bustard and black bellied sandgrouse. Not a bad quartet! Just to keep us on our toes a few distant montagu's harrier and a short toed eagle.


Several golden oriole were seen briefly as we headed to another destination. Red and black kite had already been ticked so our target was black winged kite. A single bird, distant but visible was seen in a tree as 4 male monties and a single female hunted over the field. At one point a black kite appeared to be heading for a harrier nest, but was quickly seen off. Very spectacular. As we drove on in search of subalpine warbler several Iberian grey shrikes were on posts and rollers were on the wires. White storks everywhere. No subalpine but a woodlark was seen and an Iberian green woodpecker was heard.


Next, we were off to a farm where lesser kestrel and rollers were nesting and more monties before we stopped for lunch of Iberian black pork. Superb.
Then, off to the hills for raptors. Amazing views, as we drove up shingle lanes to good heights, of 3 black vultures. This was followed by a raptor watch where we scored with griffon vulture, bonelli's eagle, golden eagle, short toed eagle as well as black kite and a distant black stork.


This was an amazing place but we were still after rufous bush robin so we headed for another spot. No luck here, with white stork ubiquitous, a little ringed plover and more nightingales and corn buntings.
So off to see a few more vultures, checking a new reservoir as we left. common sandpiper and black winged stilt were already present and considering the building work is still on going (only 4 months old) this site bodes well for the future.
More vultures were spotted before we headed off for little bustard. We got him in a field and also connected with a flyby great spotted cuckoo, my first since the one near Kelling. 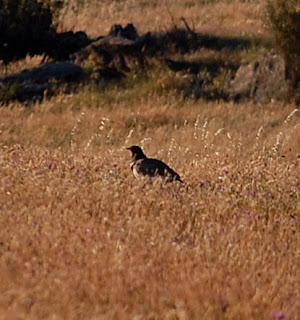 By this time it was getting late so we headed back to Castro Verde to drop off Alan and Diana. A final stop in the town to see, in the dusk, an amazing roost of 100+ cattle egrets in a single tree.
Simon and I then had a quick bite to eat before the hour and a quarter drive back to Lagos, arriving in the town at 10.30. A beer, shower and I was out like a light.
The following morning, Tuesday, was my last day, so I headed off to the saltpans around the north east of Lagos. Here I added great reed warbler, ringed plover, marsh harrier and waxbill to my list of 120+sp. Then, a train, bus and plane and I was in my local village pub for a meal by 9pm.
An excellent few days and one that I can highly recommend to any birder. Book Simon for an amazing day's birding. You won't find half the stuff he'll get for you and his knowledge of the area is second to none.﻿
﻿
Posted by Jono Forgham at 23:24