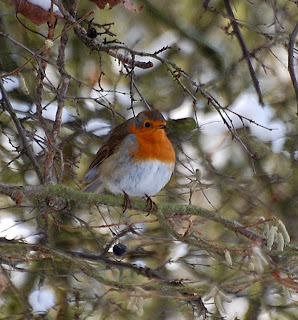 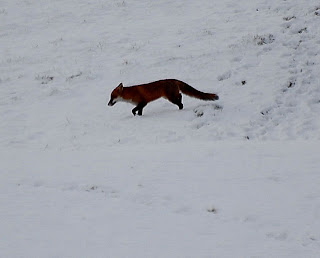 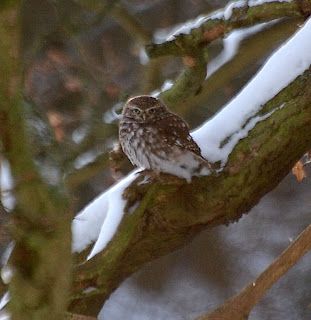 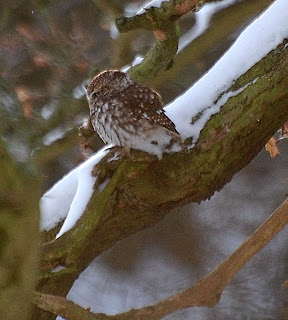 A walk back from Tesco's at midday proved most successful, albeit in the last half mile when things began to happen. Firstly, a fox wandered across the field on Brick Kiln Hill, photographed from some distance, shown here. As I watched it run out of view, I became aware of a commotion going on in the large oak tree at the top of the hill. A scan through the branches revealed what I suspected, an owl. Blue tits, great tits, chaffinches and a single blackbird were mobbing it. After some minutes I had managed to get myself in a reasonable position to get some snaps. However, the little owl then moved to the other side of the tree.This meant another crawl through the snow until I shot several photos, shown here. As can be seen by one photo, it kept its eye on me. Finally, it moved off across the footpath and into a larch where it was hidden from view. Pleased to get these couple of record shots, made even better by the green of the boughs and coating of snow.
Other noteworthy birds were numerous fieldfare and redwing, yellowhammers and 4 red legged partridge. Final photo is a festive robin.
Posted by Jono Forgham at 14:19