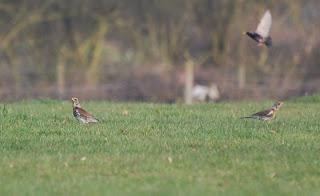 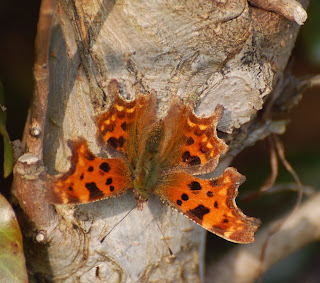 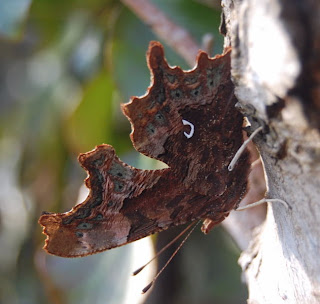 To complete the day I wandered to Millennium Wood, via Muggin's Wood and returning down Hoecroft Lane. Two new species for the day were added, in the form of fieldfare and kestrel. Having earlier suggested that the former had probably migrated I came across a field containing 35+ fieldfares, joined by 10+ redwings, 10 greenfinches, 24 starlings
However. also of interest were two new sightings. A comma butterfly, shown here, was a first for 2009 whereas a stoat, seen around the dry pond in Millennium Wood was a first for my recording period since Jan 2008.
Other birds of note were: chiffchaff, long tailed tits, green and great spotted woodpecker.
In all, for the day, I recorded 40 species of birds along with the regular mammals and several flowering plants.
Photos show a moorhen at The Ford, fieldfares near the polo field and 2 shots of the comma butterfly. Note the white on the underwing. This patch gives the butterfly its name. 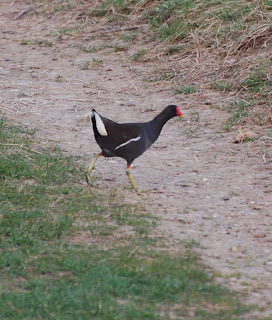